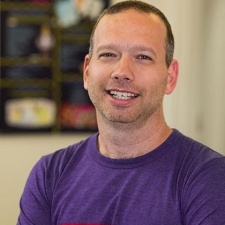 This year one of the focus points of the Summit is the balance between monetisation and gameplay. One of the main speakers at the Summit, Sagi Schliesser, Co-Founder and CEO of TabTale, will share insights in his talk.

The founder of the summit, Ofir Leitner, sat down for a short interview with him.

Ofir Leitner: TabTale today is one of the most prominent game publishers, especially for kids. How did it all start?

Sagi Schliesser: We started in 2010 – when Apple announced the first iPad. Back in the day, people didn’t know what to make of this device, and its sales estimates where somewhere between 50 to 500 million units (huge range).

Since we were engaged then with the digital reading market (Kindle etc.), this device seemed interesting for us, we thought it is something that kids would like to touch, unlike the iPhones of that era (which had a three inch screen). The idea was that the iPad would allow not just reading, but interactive reading with mini games.

We started exploring the iPad and found out the complexities of development on it, and then the idea of a platform that would allow easy production of mini-games came up.

And how was your first game received?

We decided to do an interactive book for Christmas to test our concept, and it was very well received, we had 500,000 downloads, in a market that back then had 10 million devices – so we practically had a 5% market share. We reached first place in books and third overall in the US.

After that things started moving fast, we received an investment from Magma VC, and shortly after became profitable. By 2012 we have increased our revenues 10-fold.

TabTale is known to acquire companies with 4 acquisitions to date – what’s the strategy behind it?

We believe in growth through M&As and in fact we have a person in our team who is dealing all the time with M&As. In the gaming business you have to keep your eyes open for opportunities that can help you with different markets, technologies and portfolio expansion.

For example, one of our early acquisitions was a Chinese company (Cocoplay) which helped us to get connected to the Chinese market, but also due to their technology, they worked with 3D while we at the time only worked with 2D.

That acquisition proved itself both due to the massive growth of the Chinese markets, and the success of the team there which grew from 10 to 50 and have made major contributions to TabTale.

Then acquired an American company (Sunstorm), which we bought mainly for their portfolio. And following that we bought a Serbian games studio (Level Bit) for their R&D power and skills.

You have quite a lot of games in the app stores, and that’s an understatement…

We have a motto at Tabtale which is “Release one app/game in a week”. We believe in portfolio diversity and not relying just on one main game.

Even within our games there is not always a single “graphics language”, we work both internally and with studios, and have different designers who bring their own special art and soul into our titles.

Games lifespans are quite short, so an important benefit of having a large portfolio is our ability to move our users to other games.

What about brands? Do you make branded games or use your IP only?

Though most of our IP is our own, we are also working with brands to create branded games with known characters.

We provide the engine/development and the ongoing publishing support. Brands typically look for an engine that already works to place their IP on them, and also they must have a publisher that can keep the game “alive” in terms of promoting it, renewing assets and so on.

You are mostly known for kids games, but lately you’ve been speaking of casual games as well – can you tell us more about this move?

We decided not to focus only on kids games, but also in the super casual games market. We built a new brand, “TabTaleGames”, under which these games will be published. We already have 15 to 30 games in the pipeline that will be published soon.

We think there’s a big opportunity there, and we plan to be by the end of 2018 with a balance of 60-40 or even 70-30 from our portfolio in favour of super casual games.

Isn’t the super casual market very different than kids games? Suddenly you have an adult audience?

It is true that the audience is new - in our line of kids games we already have a big audience of about 40 million active users, so we do not need to make a lot of user acquisition efforts.

In super casual we also have an audience, but smaller, so we will need to do more UA. But we already know how do it from our past experience.

While it did require some important adjustments, in the end the processes are very similar in both lines of games, and we already have the DNA to make it work.

And how do you monetise games? Any differences between kids games and super casual?

In the kids games, there’s a big movement towards subscriptions. Apple and Google are pushing to that direction and it also makes sense for us. We are giving users access to “TabTale World”, through which they get many titles as long as they’re subscribed.

In super casual games it is much less in-app purchases and more advertising. So monetisation comes almost 95% from mobile advertising.

Another important point for both – is that retention comes before monetisation, always. You first have to create a good game experience, so that you will actually have users that stick around, and only then integrate monetisation into that experience.

And how do you choose your monetisation partners?

We get dozens of emails from companies in that field – we first ask about them and their reputation, and see if they have any clear advantage, for example if they are strong in a specific territory that we want to get into. If this is the case, we do a small test, and see the results.

Another important issue is their ability to integrate well within our games, since the game experience always comes first. And that is especially true with the endless patches and versions in both iOS and Android to which ad networks have to be able to adapt to quickly.

In the Israel Mobile Summit you will speak about “Art, data science and monetisation – how do they mix?” – can you tell us a bit about this session?

In the past I was a CTO of a big software company in which I dealt mostly with technology.

When you run a games company, you discover that you’re also responsible for art, which is not just a matter of clear cut measurements that technology has – on one hand you have the soul and your gut feeling, and on the other hand you can be more analytical, put it to the test and see what the data says.

We found out very surprising and non-intuitive findings, which helped us refine our own understanding of what works and what doesn’t.

As part of our methodology, a concept art for a game would have four to five options for the same character, and about 10 to 15 options for an icon. We do a lot of A/B testing and see what catches, but even then we sometimes follow our gut feeling and go with an icon that wasn’t the top performer at the small scale tests.

Our intuition sometimes works and sometimes doesn’t, but it’s important for us also to test ourselves and from time to time release art that failed the official tests – and in that way to test our own processes.

In my session I will show to the audience several options we had for various games – and let them guess what was most well received and what we went with. Knowing the answers I can tell you now that it’s not going to be an easy to guess, and I’m sure people will be surprised.

Sagi Schliesser will share more insights in his talk at the Israel Mobile Summit – see more details at the Summit’s website – www.israelmobilesummit.com.