From Kickstarter to mobile with Mark Venturelli 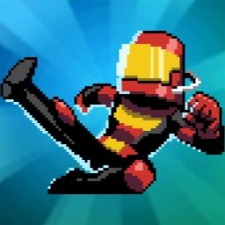 A management strategy game about running a TV studio making a larger-than-life, Power Rangers-style superhero series, it captured the imaginations of nearly 4,000 backers with its nostalgic feel.

The game launched on PC and Mac in April 2015, before eventually coming to mobile and consoles - now published by Bandai Namco - in May 2017.

It's been a long road to here for Behold Studios, so to learn more about the game's development and the process of bringing it to mobile, PocketGamer.biz reached out to Game Designer Mark Venturelli.

PocketGamer.biz: When did the idea of a tactical RPG based around a Japanese superhero TV show come about?

Mark Venturelli: Our generation in Brazil grew up with Japanese TV shows airing every morning - we had Changeman, Flashman, Kamen Rider, Jiraya and many others, dubbed in Portuguese.

It had a profound impact in our childhood, and when the original Mighty Morphin’ Power Rangers aired it became a nationwide fever.

I remember dressing up as the blue ranger and running around the house as a little kid!

Tokusatsu - and Super Sentai, especially - became culture, both in Japan and overseas. It transcended its “kids show” origins with campy charm, while still being approachable to kids.

With Chroma Squad we tried to capture the energy and honesty of Super Sentai.

It’s a rare example of a genre in geek culture that managed to grow up with its audience without becoming gritty, violent or sexualised and alienating younger fans.

With Chroma Squad we tried to capture the energy and honesty of Super Sentai, and Behold Studios has a knack for meta-commentary of geek culture that started with Knights of Pen & Paper.

Even though the premise may sound weird at first, it was a very natural game for us to make!

What were the biggest sources of inspiration for Chroma Squad, both in and outside of gaming?

Beyond the obvious Toku inspiration and reverence, we were inspired by the SRPG genre’s classics such as Final Fantasy Tactics and Fire Emblem.

Both Saulo (CEO of Behold Studios) and I have a background in film/TV, so that was a defining influence.

Also, the story of how Chroma Squad struggles to build their independent show draws very clear parallels to Behold Studios’ own journey to build its indie games, so our own story and day-to-day struggles became an inspiration for the game.

One of the standout features of Chroma Squad's combat is the teamwork system. When did this idea emerge, and how important was its inclusion?

When I joined the project as game designer, I knew we needed to stick to Behold’s design pillar “Old But Gold” - focusing more on familiar mechanics and simple gameplay that does not get in the way of the fun, and allowing the fantasy of the theme and the quirkiness of the premise and dialogue to take front seat.

We needed, however, a single, strong innovation to make the gameplay appealing and not just a boring pastiche of better games in the genre.

It was a long and complicated design process, and I tried many different approaches (and watched hundreds of hours of Super Sentai!) in the search for a single, simple mechanic that could make for fun gameplay and capture the spirit of how Toku fights work.

"Teamwork" (both Team Acrobatics and Team Attacks / Finishing Moves) was everything we were looking for, and it fit the game and the theme beautifully.

I believe that, alongside the “Audience” system, it provided the game with its identity while at the same time reinforcing the theme and the fantasy.

How complex an undertaking was it to balance both turn-based RPG and management elements in a satisfying way?

When we started, our plan was to go full “manager” - episodes would be less linear, and we were inspired by actual management games such as Game Dev Story and The Movies.

We ended up focusing more on the SRPG parts, and the game benefited from it immensely.

Soon, however, we found out that this was extremely challenging, as we were essentially making two games in one.

It also clashed with the traditional narrative style that Behold’s writer Guilherme Mazzaro brings to their games.

We ended up focusing more on the SRPG parts, and letting the management parts function as upgrade systems rather than full-on strategic simulation.

I still believe this was the best choice, and the game benefited from it immensely.

Managing your studio is more of an exercise on customisation and the fantasy of being an indie TV studio rather than actually making complex strategic choices and risking a fail state in the middle of the campaign.

How big was the team on Chroma Squad, and how long was the total development time?

By the end we were about 10 people, and until the original PC release in 2015 it took us about two years of development time.

Was it always your intention to bring the game to mobile, and how did you set about adapting the game for the platform?

Not really - we knew it could work really well on mobile, and we wanted to do it eventually, but we weren’t sure we’d have the resources to do it. Thankfully, we eventually did!

Adapting the game for mobile was at the same time satisfying and challenging. The genre works really well for touch-screen commands, and its turn-based and low-pressure nature is also a great fit for mobile.

On the other hand, most of the screens were not designed with mobile in mind, and we also had some trouble with session times - some episodes can take over 30-60 minutes to complete, which is far beyond your average mobile gaming session.

We are very satisfied with the results, though, and playing on a tablet is my favourite way of experiencing Chroma Squad!

When it comes to making a crowdfunded game, do you set out to please backers first and foremost or is reaching a wider base of players always the priority?

This was our first crowdfunded game, and it was an amazing experience. This was always meant to be a fan-service game first and foremost.

We wanted to make a game by fans, with heart, and not just a simple license tie-in.

We wanted to make the game that Toku fans deserved - a game by fans, with heart, and not just a simple license tie-in.

In that sense, pleasing the backers and listening to their feedback was our first priority, and I believe the game benefited a lot from that approach.

Also, the backers were far more interested in the fantasy and the universe than in complex and deep SRPG gameplay, and this helped us shape the game’s identity and allow it to reach a wider audience that doesn’t normally play this type of game.

People who are intimidated by complex games such as Disgaea might find a good entry point to the genre in Chroma Squad!

When did Bandai Namco come on board, and how big a role did it play in the game's release?

Bandai Namco came on board last year, and it allowed us to have the resources and experience needed to get a small dedicated team working on both mobile and console versions of the game.

We have a history of mobile releases already, but consoles were new to us, and Bandai Namco helped us a lot in learning the ins and outs of the platforms and their processes.

It was, by far, the scope of the game’s content. It is huge for indie studios’ standards, with about 30 hours content split in multiple story paths.

Picture me, as the only game designer, trying to test this game: even in “speedrun” mode it takes me almost 10 hours to do a full pass!

We are now working on releasing New Game+ functionality for mobile and PC, which triples the play time!

Even with the support of Bandai Namco's QA teams, it is an Herculean task to ship that much content with balanced gameplay and no bugs.

I believe that most players understand that, though, and they know we’re doing our best and that we love the game as much as they do.

It might take us a while until the game is 100% bug-free and polished, but we will get there eventually!

Do you feel that mobile remains a worthwhile platform for developers to launch their multiplatform games on?

Definitely! Some colleagues from the industry asked us if we felt it was a good move to release a premium game with a premium price point on mobile, but we have been pretty successful with Chroma Squad.

I believe it comes down to understanding that there’s all kinds of consumers in all platforms, and just because a certain business model is more popular it does not mean that it is the only viable one.

What are you working on now?

For Chroma Squad we are still full steam ahead with patches and fixes!

We are working on a Director’s Cut edition which will bring New Game+ and many other cool features and improvements to both mobile and PC version.

After Chroma Squad is fully done I plan to focus 100% on my new game, Relic Hunters Legend, which is my dream game that I hope to reveal this October on Kickstarter!