CEO Mark Gazecki on the making of Desperate Housewives 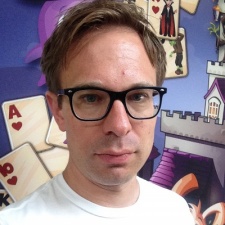 The list of TV shows with their own mobile games is growing.

Recently joining this ever-growing list is Desperate Housewives, which now has its own free-to-play mobile game courtesy of Munich-based developer MegaZebra.

More than five years after the TV show's finale aired, the mix of life simulation and episodic storytelling exhibited in MegaZebra's own Suburbia series seems to make the studio an ideal fit for the project.

But for every The Simpsons: Tapped Out, there's a Breaking Bad: Empire Business.

So to learn more about how MegaZebra has gone about adapting the series for the mobile platform, and the potential for story-driven episodic content on mobile, PocketGamer.biz reached out to co-founder and CEO Mark Gazecki.

PocketGamer.biz: How and when did the opportunity to arise for MegaZebra to work with the Desperate Housewives license?

Mark Gazecki: We started working with episodic storylines in our Surburbia games quite a while ago. These games are playable on Facebook.

The idea was to translate TV-style storytelling into video-games. In that process, Desperate Housewives kept coming up as a reference.

So when the time for a new game came, we reached out to develop a game based on the Desperate Housewives IP.

Based on our track-record with these types of games, and our vision for this new game, we signed a deal.

Tell us about the episodic, TV-like structure of the game. Why did you decide to take this approach?

The video games industry has by and large treated stories in games like films and books.

We wanted to apply this concept to video games, as it fits really well with two other major trends - namely, free-to-play and mobile.

We give our games structures like TV series, and think about hooks and cliffhangers a lot. In the process of developing our games, we did learn a lot about how to adapt what works for episodic storytelling in TV into a formula for video games.

It was also important for us to combine our episodic storytelling with true, free-to-play game-mechanics.

We did not want to charge for downloads or individual chapters, but rather enable a true free-to-play experience for players. I think that sets this game apart.

Celebrity and TV tie-in games on mobile have a mixed success rate. What do you think is important in successfully translating a property like Desperate Housewives to the platform?

It is easy to bank too much on the IP thinking that the IP alone will carry the day.

When we developed the Desperate Housewives game it was important to us that the game would stand on its own feet without the IP.

We tested this extensively and worked towards a situation where we know that the game metrics are strong without the IP.

We also refined the game mechanics so that they fit the IP really well. We didn’t just slap on a match-three mechanic, for example. We wanted to capture the essence of the IP with the gameplay.

The TV series has a very distinct, high-quality visual style. With our game we wanted to reflect this, with game art that captures the feeling of the TV series.

Finally, game mechanics and story have to work together well, and fit the IP and its audience.

We feel that games sometimes stretch either mechanics or story too far away from the IP.

We feel that games sometimes stretch either one too far away from the IP. Game mechanics and gameplay have to work for your target audience. We hope that we got it right for the Desperate Housewives game.

How different an experience has this been compared to MegaZebra's previous titles and what have been the unique challenges?

This is the first time we worked with a third-party IP. Before we went into this, we heard horror stories about working with large Hollywood studios.

With our earlier games, we did not have an external partner and basically just did what we thought was cool. In this project, there was a lot more need for communication with our partner.

So sure, this creates some additional work and complexity. My background as a former management consultant definitely came to play as we made sure that everybody stays informed and aligned.

At the same time, our partner obviously knows a lot about the IP so in the process we also got really good input.

What have you learned from the game's soft launch, and what are the biggest changes you'll be making as a result?

We had the game in soft launch for about six months. Our learnings and changes were actually pretty extensive.

We tweaked the first-time user experience a lot, considering things like the sequence and pace of teaching gameplay elements and how fast to ramp up the story.

We also adapted gameplay mechanics to fit the IP even better. One of the aspects, which we found people really liked, was building relationships with their beloved Housewives, so we amplified that part of the system.

In the end, we also modified how storytelling and gameplay interact. That was probably the biggest thing, and we decided to do this pretty late.

This was actually pretty risky, but our retention metrics ended up showing that it worked out for the better.