Only the smart survive 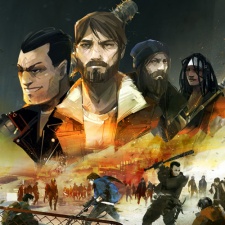 “First off, we’re all huge The Walking Dead fans,” states Disruptor Beam’s creative director Joey Lapegna when asked why the Boston developer is adding to the games already set in that zombie apocalypse world.

The Walking Dead: March To War is also based on Kirkman’s IP, but is genre-differentiated from the turn-based strategy of No Man’s Land and the autoplay RPG character collection of Road To Survival.

Combining the sort of base-building seen in 4X games such as Game of War with the strong focus on narrative that unpins all of Disruptor Beam’s games, it’s also the only one of these titles designed for phone use in portrait, not landscape, mode.

That may not seem like much but it makes March To War feel more accessible, which is important given its short sessions and heavily time-based metaplay.

Despite this, it’s the opportunities for character-based narrative that’s inspired Lapegna and his team in this and the company’s other titles.

As he explains: “We’re interested in worlds and the stories we can tell in them."

Disruptor Beam’s other titles are Game of Thrones Ascent (based on the novels) and Star Trek Timelines.

Neither have been smash hits - Games of Thrones Ascent peaked at 49th on the US App Store back in 2014, with Star Trek Timelines’ best placement at 92nd in 2016 - but both have demonstrated strong audience retention, as well as the developer’s growing understanding of live operations.

The Walking Dead isn’t about the walkers, it’s about the survivors.

It expects to build on this with its latest release, of course.

“At the start of development, we thought about how we could do justice to the IP. We were seeking a place of authenticity,” Lapegna states.

This approach led to a surprising conclusion.

“Very quickly it became clear The Walking Dead isn’t about the walkers, it’s about the interaction of the survivors and groups of survivors,” he says.

In this context, one of the key game features is how the player manages their survivors.

Indeed, as the TV series demonstrates, in such as brutal and uncertain world, many characters are disposable; something the game mirrors.

So, while hero characters - the council members - act as permanent anchors for gameplay and plot development, any survivor can be killed, permanently.

“Permadeath is authentic to The Walking Dead, but we don’t want it to be punishing for players,” says Lapegna.

“There’s a triage system so some can be healed. The player has agency in terms of which survivors they keep alive.”

This is important as beyond the usual rounds of building upgrades, resource management and research boosts, recruiting and leveling up your survivors is the most interesting part of March To War.

There are different character classes to choose from, while levelling them up also unlocks deeper specialisations. Combining your survivors into parties to fulfil different mission types is one of the game’s deeper skills.

If managing your survivors is the meat of the daily game experience, it’s narrative choices that provide the long-term arc, however.

In-game, these are offered as simple dual-answer questions that tie into key characters such as Negan, Hershel and Jesus, with the game tracking your choices and reacting accordingly.

Running alongside this is the dilemma system. More lightweight in its current implementation, again it has a dual-answer questions set-up.

“We added this during soft launch and players seem to want more,” Lapegna reveals.

We’re interested in worlds and the stories we can tell in them.

“It doesn’t impact game features yet but we’re going to iterative it over time.”

There will be a similar approach to communities, which is March To War’s guild system.

As with many other mobile games, joining a community is required to get access to the features and rewards which will drive deeper long-term progress.

Part of this will be grouping together to defeat huge walker swarms in raid missions, while - returning to the source material - communities will also be fighting each other over landmark sites.

The game is set in Washington D.C. so iconic locations include the White House, Lincoln Memorial and the Pentagon. Ownership of such landmarks will generate large amounts of resources.

And it’s this attention to authenticity throughout design that Lapegna hopes will see March To War find its place atop Disruptor Beam’s games, other The Walking Dead titles, and more than just surviving in the ever competitive app stores.