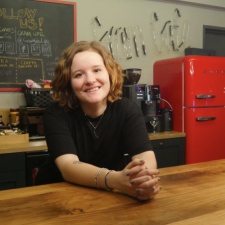 The developer expanded out from Istanbul with a new headquarters in London, which got straight to work and launched its first game, Merge Dragons!, in June 2017.

It wasn't just a new game, however – it was also the first time that Gram had experimented with IAP, having previously developed casual games that were entirely supported by ads.

It's an exciting time for the developer, and Culture Developer Erin O'Brien is definitely pleased with how the year has turned out thus far.

On top of new studios and new games, "the year's allowed us to explore a lot of new talent, a lot of new people as we've expanded into this IAP space," she explains.

"The rest of the year promises a lot of releases – exciting releases, in my opinion."

Gram is keeping tight-lipped on what form these games might take for now. But one thing is clear - it is very excited about the potential of IAPs.

IAP is a really exciting space to be in – it allows you a lot more creativity and freedom.

"IAP is a really exciting space to be in – it allows you a lot more creativity and freedom with regards to what you can explore in terms of gameplay," explains O'Brien.

"We're a company that wants to be making games for the players, we want to be a company that's making fun and entertainment for people, and IAP gives you the opportunity to be very responsive to that.

"And also, we had our three hit puzzle games, and while those are really exciting and really great, we wanted to see what else our team can do."

The decision to try something new is paying off – O'Brien states that Merge Dragons! is performing well, particularly in terms of its community and fanbase.

And it seems to be a shrewd business move too. While Gram is still exploring different areas of monetisation, IAP is definitely something it is interesting in pushing further into.

"It's a very interesting realm to venture into, and see how you can use the data and player response to build involved, engaging gameplay that allows the game to stay alive without the distraction of ads," says O'Brien.

"Merge Dragons! has been an incredible experience with regards to that, and the titles that we have to come have also allowed us to further explore mechanics, meta, different forms of integrating IAP."

But that doesn't mean it won't be making ad-based games anymore. "Diversity is always a smart move," says O'Brien.

We are a company that puts a really, really high premium on the culture that we create.

But Gram is only diversifying so far. A core title is off the cards – for now – as it focuses on its "mobile social" realm.

While a core game may not be on the table, the company is exploring implementing metagame elements in all its games – including casual releases like Bounzy!.

"We're interested in adding more and more – it depends on the demographic, it depends on what people want and what they respond to," says O'Brien.

"But the way we work as a company, we very much give the freedom to our team to explore the things that the data says will work, but also that they're interested in creating.

"As our team has delved into these games, they've become very interested in the idea of building another narrative on top of these puzzle games, and keeping it simple and casual while also allowing people to semi-engage in the way that you would in a mid-core game."

That team isn't looking to grow anytime soon either. After a rapid expansion at the start of 2017, with a new studio opening, Gram is slowing down to let the new people settle in a bit more.

"We are a company that puts a really, really high premium on the culture that we create and encourage within the organisation, and it's something we're very diligent about every time we bring someone new onto the team," explains O'Brien.

"Our interview process is like, six steps long. Expanding and growing the team is not something we take lightly."

We don't just want to be the company that makes puzzle games.

The company is particularly wary of growing too quickly and losing sight of the culture that led to its initial success, as can be the case when developers expand rapidly.

"At the end of the day, we view our culture as just as integral to our success as our products," says O'Brien.

So as much as Gram Games is gearing up for a busy period for releases through the rest of 2017, its settling down to give its team some time to relax, settle in, and try new things before it looks to expand anymore.

"We're exploring different ventures, like what we can do with the games we've created – we want to be a scalable entertainment company, we don't just want to be the company that makes puzzle games."