We speak to We Heart Dragons, the winner of The Big Indie Pitch at Develop:Brighton 2017 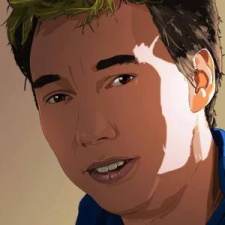 Alex Trowers: I started making games professionally back at Bullfrog in 1990. There, I had the very great fortune to work on almost all of the games they did from Powermonger all the way up to Dungeon Keeper 2, with Syndicate being a particular highlight.

We Heart Dragons was founded with my better half, Leanne Bayley (Develop Gamerbake Champion, 2017) after I lost my job at Boss Alien while she was pregnant with our first child. It then became a race to see if we could launch our first mobile title before the baby arrived.

Top tip: don't try to do that. Now, four years later, we've just released our third mobile title, Glyph Quest Chronicles, and are halfway through developing our second child, due in November.

The project we pitched is called Richard Reed's Space Krieg. It's a tactical space dogfighting MOBA, pitting teams of five players against each other in a battle to the death. It features an incredibly innovative input system - a blend of real-time and turn based that we like to call "real-turn" (Okay, I like to call it that - Leanne hates puns).

Players input their moves "Simul-turn-eously" (seriously - hates them), against an aggressive time limit. After that, you see the moves played out in real time and the process repeats. It creates a very tactical feeling and, when we stitch together all of the little real-time snippets into one fluid replay at the end of the game, makes for some seriously badass moves.

You've heard it before, but the mobile space is brutal. There's so much noise that it's very hard to make an impression without spending an inordinate sum of money - something that indies really don't get to do generally.

There's also a really toxic mindset when it comes to consumers and their impression of what constitutes value. In short, it's hard to get people to find your product and when they do, they don't want to spend any money on it.

I love pitching games. I get very enthusiastic about the games I work on and love any excuse to demonstrate that enthusiasm to a captive audience. It's the faces, see? You can tell when you've got them hooked. The eyebrows go up a little. You get the odd "really?" or maybe even a "wow". You can see them getting excited too.

I love those meetings where the pitch descends into an impromptu design session where the questions stop being "how do you intend to..." and turn into "wouldn't it be cool if..."; my favourite phrase in game development.

Well, with Glyph Quest Chronicles being released this week, we've ended up with a marketing budget that we didn't have previously... Also, with Leanne's frankly ridiculous Dark Souls cake snatching the Gamerbake title at the same time that night, we went some way to enhancing our reputation as an "indie power couple".

It was also very gratifying to have the response that we got. Space Krieg is a deeply personal project and it's great to see that our love for it is shared by others - even those that are new to the story.

We have big hopes for it. Our ultimate aim is to see it blossom into the next, great eSport - there's nothing quite like swinging for the fence, eh? It's a fantastic game to play and we've very much enjoyed taking it to shows like Insomnia and Nordic Game and putting in the hands of the general public.

Even at this embryonic stage, the feedback has been overwhelmingly positive. Long may that continue. As far as other projects go, we've got a couple of little ideas for simple mobile titles - but first we have to see how well Chronicles does.