We speak to Sketchbook Games, who came third at The Big Indie Pitch at Develop:Brighton 2017 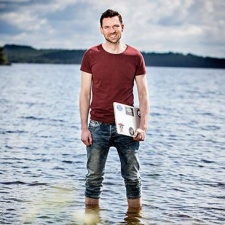 Today, we're speaking to Sketchbook Games' Mark Backler, who submited Lost Words to the Big Indie Pitch at Develop:Brighton 2017 and took away the third place prize.

Mark Backler: Sketchbook Games is a small studio based at the Games Hub in Colchester at Essex University, although most of the team work remotely. I've worked at companies like Lionhead and EA and founded the studio in 2015.

Rhianna Pratchett is writing the story, Audrey Profit is the programmer, Luke Peek is VFX, Rudi Kolenc is animating, Lynne Liu and Billy Wimblett are the artists, Maurice Suckling is doing narrative design and Ben Hill from Advect is helping with production. We're inspired by games like Life is Strange, Journey and Gone Home.

Lost Words is a platformer set between the pages of a diary and a fantasy world. It sees players walking on words and using them to solve different puzzles. The story is about a girl aspiring to be a writer who is being mentored by her gran, but when her gran becomes ill, young Izzy uses the fantasy world she's writing about to help her deal with what's going in the real world.

We've been running two years now but Lost Words is going to be a Steam and console release first so we have a different model to other mobile developers, but it's definitely really hard to stand out in the mobile space as there are so many games and so many of them are free.

It makes it really hard to invest a lot in developing a mobile game, which I think is a shame because it means that we're missing out on some great mobile premium experiences.

It was really cool to meet so many other developers and industry experts. We got some great feedback on the game and it was really helpful to hear what all the judges thought.

I've learnt tons about running a studio, budgeting, fund raising, hiring, marketing, programming, graphic design and loads more! I'd like to learn about all the details of shipping a project across multiple platforms and publicising it.

There's lots of places we would love to take the game in future but we want to see how it goes and how we feel when we're coming to the end of development. We already have a few ideas for game two and three floating around but we don't want to lose focus on making Lost Words the best possible game we can.