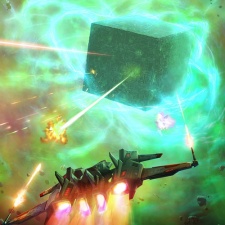 On September 12th 2017, SPYR Games acquired 100% of the assets to Spectacle Games' sci-fi MMO Pocket Starships in a cashless transaction.

The deal had been on the table for some time – SPYR had taken over as publisher in January 2016 and had acquired the option to purchase the game in July 2016.

And it leaves both parties quite happy. SPYR now gets all the revenues from the game, plus the option to re-skin it for other releases, while Spectacle gets absorbed into the publisher as per the original purchase option agreement.

"We had some good reviews and a good audience. It's an older game, so we started beefing it up a bit and thinking about what we're going to add," says the game's creator Lars Koschin.

The team looked at its game and felt that it already worked well with the Star Trek universe – its technology and research concepts had already drawn inspiration from the TV show, for example.

CBS has a matching engine... and we had an 85% match with their brand.

The only stumbling block was that Pocket Starships is a shooter with a heavy focus on action, while Star Trek is traditionally more about diplomacy and discussions. But CBS felt it was a solid match as well.

"CBS has a matching engine that matches their IP with games or content and we had an 85% match with their brand," notes Koschin.

Partnering with CBS wasn't useful just for the theme, however. Teaming up with a major IP and the production company behind it also turned out to be a particularly shrewd business move.

"We get a lot of support from CBS – it's going to be pushed on StarTrek.com, and the new TV show comes out at the end of the year, so we can piggyback on that," says Koschin.

It's not just a genre and setting fit either. Koschin feels that the audience for Star Trek will also be a fan of Pocket Starships' simple controls.

"Star Trek fans are sometimes a little bit older, like I am," he laughs.

"They're not so keen on 3D games on mobile devices, so we used the dual-stick, top-down controls to make it simple and easy to understand and control."

If it takes you one week to see the first Borg – that doesn't make sense.

With the genre match in place and the greenlight from CBS, all that was left was to come up with a reason why Star Trek had joined a universe where discussions were replaced with lasers.

"There is an enemy that doesn't discuss, and that's the Borg," notes Koschin.

The story goes that a rift in space opens in the Pocket Starships universe, and through it comes the Star Trek crews fans know and love – followed closely by the Borg.

But this isn’t just a story that's going to be added on for existing players. The whole game is being revamped so that the Star Trek universe is a part of it from the very beginning.

"As soon as you enter [the game], you will see Star Trek," says Koschin.

"If you're a Star Trek fan and you see Star Trek: Borg Invasion, then it takes you one week to see the first Borg – that doesn't make sense.

"There will be a new tutorial that will show Star Trek right from the beginning, with the new ships and new equipment."

Existing players won't miss out on the new equipment, however. Ships in the vanilla Pocket Starships can be upgraded to a Star Trek ship with the purchase of a new skin, and each skin is mapped to an existing ship that already has similar traits and aesthetics.

It's not just ships – crew members will also make their way over to the game, joining and replacing existing Pocket Starships characters and offering benefits to players when collected.

And new weapons will also be implemented, which will help out in the new Borg-centric missions that are being added.

We are pretty convinced people will like this style.

The Star Trek: Borg Invasion content is making its way to Pocket Starships in late October 2017, but it isn't going to be just one expansion pack. SPYR already has plans to release additional content in the future, both using the original Pocket Starships universe and the Star Trek brand.

"Star Trek is about exploration, so we have a lot of different sectors and galaxies, but it's more about the fight than exploring," says Kolschin.

"So if the Star Trek fans are okay with it, and they think that Borg Invasion is good, then we can start expanding into deep space exploration.

"I would love to do that – it depends on if the players like it, but we are pretty convinced people will like this style."

Early impressions seem positive, both from fans and the IP holder, so the only true test now is to see if the general public enjoy the expanded content when it launches in October 2017.