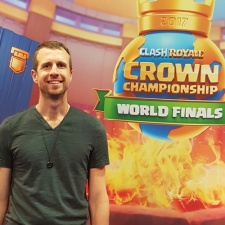 It’s a venue that was built for the London 2012 Olympics. And fittingly, Supercell’s production partner for the World Finals is a company called Done+Dusted, which produced the opening and closing ceremonies for the London Olympics.

The event is the culmination of months of tournament matches that started in August with 27.4 million players from 187 countries. There was a $1 million prize pool earmarked for the Championship, $600,000 of which has been paid out so far.

There will be a six-hour livestream as the World Finals' 16 players from 10 different countries battle it out to be crowned the best Clash Royale player in the world.

“I like to think we're channelling some of that Olympic spirit because we are bringing the best players in the world here to compete and find out who is the best,” says Supercell’s eSports man Tim Ebner.

Around 1,500 people are expected to attend the event in person, where they’ll be treated to six hours of high stakes Clash Royale matches featuring the best players in the world.

Supercell is sparing little expense for the event. A large projector screen on the floor, including large televisions around the venue, will show gameplay to the packed stadium to ensure attendees don't miss a thing.

The game will be streamed in nine different languages to players around the world, with millions expected to tune in.

Supercell’s largest Clash Royale event yet has been the King’s Cup II. It attracted 190,000 concurrent spectators and around six million views within two weeks on YouTube.

“That's the biggest event we've had yet, so hopefully we'll match and surpass that,” says Ebner.

Viewers won’t just be treated to tournament play. Much like the Olympics did, the event will have its own opening ceremony featuring fire performers, as well as other acts throughout the World Finals. Also aired throughout the event will be player profiles that delve deeper into the real lives of the top players.

According to Ebner, Clash Royale wasn't conceived as an eSports title, though its potential for such professional play became obvious early on.

I like to think we're channelling some of that Olympic spirit because we are bringing the best players in the world here to compete.

“We had a team build a game that they thought was fun and engaging, but we realised ourselves in internal playtesting that it was a little more fun when it was part of a tournament,” says Ebner.

“We saw it with the players too once we released the game, they were sort of organically or naturally creating their own tournaments and competing because they want to know who the best is. They want to improve themselves or they want to watch the best players and learn from them.

“So just realising that it’s fun and natural to compete got us thinking about eSports. We know that people are watching people other people play in the game through TV Royale, which has garnered billions of views.

“That said, it's early, we're just getting started and we have a lot to improve and work on. But it feels to us that there's some potential there.

Supercell has taken a different tact to most when organising the Clash Royale Crown Championship. It invited everyone to play, and 27.4 million people obliged.

Many of course may not have been completely serious about going for glory, rather seeing the event as an exciting game mode instead of aiming to become an eSports professional and win hundreds of thousands of dollars.

It’s different to the large professional teams of eSports competitions for the likes of League of Legends, StarCraft 2 and Counter-Strike: Global Offensive, as well as the city-based team structure Blizzard is building for Overwatch.

“We aspire to make games for as many people as possible that they'll play for years and years,” explains Ebner.

“And we wanted to incorporate that philosophy into eSports, meaning that it's accessible for most of our players or as many players as possible.

And that means different things. Accessible means they can compete, they can participate in some way like they did in August, or they can just watch. It is important to us that a large portion of the player base cares about some aspect of the competition.”

You can watch the Crown Championship YouTube livestream below.