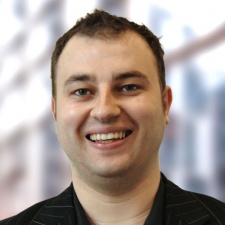 This week, we talk to David Lane, co-founder and managing director of Brighton-based developer Fat Fish Games, known for its casual sports titles such as Tiny Striker and Tiny Tennis.

The developer was a finalist for Best Indie Developer at the Mobile Games Awards. You can read all about the winners here.

David Lane: Not wanting to work for anyone else, myself and Jonasson Lochner formed our own software company upon graduating from university in 2004. We were joined on the creative side by Anthony Barker, who was a school friend of Jonas'.

We enjoyed playing games, so we were drawn to their development, but not having a lot of experience or money we thought mobile development might be easier to tackle. We therefore partnered with a popular football fan site at the time to produce our first mobile game, a football manager game.

This was a fun time, as it was long before the iPhone appeared and apps became popular. We also had some interesting technical requirements with the handsets of the time - for example, a 64KB file size limit.

Where did the name Fat Fish Games come from?

I would like to say there was some great meaning to the name, but really, we were looking for something fun as well as a name that we could get a domain and social media handles for.

We therefore all shared a spreadsheet and listed names over a few weeks and this is the name we decided upon.

What does a typical day look like at Fat Fish?

Even if you have a great game, trying to get users to find it is very difficult without a six-figure marketing budget.

We start each day with a team stand-up to discuss project progress. Some of our team are then working on updates for our main game franchise - Tiny Striker - whilst others are working on rapid prototyping for our next games.

With this process we are producing very small gameplay prototypes over a period of five days and then testing them with users. The performance of the game here ultimately determines if it lives or dies.

What drew you as a studio to focusing on casual games?

I think we were keen to work on titles that could be developed quickly and get into the hands of a lot of players.

I also still think that the mobile platform works best for these pick-up-and-play snack-sized games, that can be played when you have a couple of spare minutes, and casual games fit this so well.

I think the biggest challenge that probably most indie developers are talking about at the moment is discoverability. Even if you have a great game, trying to get users to find it is very difficult without a six-figure marketing budget.

This isn't helped when you see the charts dominated by a couple of companies that have a big userbase and a lot of money for marketing.

I think it is very tough. As I mentioned previously, getting your game noticed is one of the biggest challenges.

The industry is changing so quickly that it is hard to justify spending 12-plus months developing a game for a small studio.

You also have to consider that, even for a small studio, there is a not insignificant running cost that needs to be covered whilst you are building that hit game.

On the positive side, there is still a massive market out there, and if you can stand out from the crowd, there is money to be made.

Our biggest recent game has been the latest addition to our Tiny Sports franchise - Tiny Striker: World Football.

The game performed above all our expectations - reaching over two million downloads in three months and more than 20,000 replays shared on social media. It also won the Develop Big Indie Pitch in 2016.

The great thing from the success of the game is the attention it gave the studio, which has allowed us to sign some partnerships to expand the Tiny Sports series.

As I mentioned earlier, we are currently working on a branded version of the Tiny Striker: World Football game, as well as looking to release the game in China.

We are also testing out a new football game in the Tiny Sports series which we hope to launch before the end of the season.

I really enjoy real-time multiplayer titles like Clash Royale and I think there is still a lot of potential for this type of game, so I would love to make a game in this area.

In the mobile space it has to be 'fail fast' – the industry is changing so quickly that it is hard to justify spending 12-plus months developing a game for a small studio.

I think quick prototypes, testing with players and seeing what works is the way to go.

Why Google must do more to win mobile developers' hearts