Indie Spotlight: Accidental Queen's Diane Landais on giving credit where it's due and moving on from lost phones

"My typical day is mostly not what I expected it would be before I actually founded an indie studio." 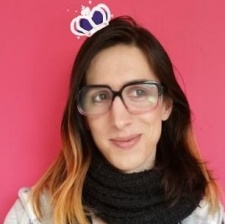 This week, we talk to Diane Landais, co-founder of Accidental Queens, the developer behind A Normal Lost Phone and Another Lost Phone: Laura's Story.

Diane Landais: I grew up with a love for video games, computers and tinkering. Tinkering with computers led to learning how to program things - websites first, then eventually small “games”; though I don’t think I could’ve considered anything close to being done at the time…

I got an internship in an indie studio in Paris, basically validating my love for bleeps and flashes over anything else. I tried staying in school but got a job in another studio in the west of France, coding stuff so that creative people around me could make even more bleeps and flashes.

What drew you to narrative-led games over a more traditional gaming experience?

Every game is “narrative-led”; the less words there is in a game, the more room there is for you to put your own words there. (Fight me).

What we easily call “narrative-led” games are usually titles that take the best parts of other mediums: the techniques for writing strong characters applied to a text-based game, achievements of photography for a cutscene-heavy game, etcetera… But it makes sense.

My typical day is mostly not what I expected it would be before I actually founded an indie studio with my associates.

The catch lies in three words: running a business. If we exclude Mondays - universal 'worst day' and also the day we dedicate almost entirely to administrative tasks and paperwork - the typical days sometimes include 'making games'.

The rest of the time is dedicated to:

When there’s really nothing else, then it’s a 'making games' moment, and those are the best. It’s just weird, because the hardest thing in all of this is not making games, it’s creating the environment that will enable us - and whoever makes games with us - to actually make games.

I believe 'success' starts at the very moment we can sustainably start thinking about 'personal accomplishment' in our work.

Finding the opportunity to “become indie again for a short while” is not an indie job at all. It’s worth it though.

In no particular order:

Functioning as a human being amongst other human beings. That’s hard in any situation, but after a great deal of personal sacrifices, and a long piling up of production mistakes, when the stakes are at their highest before releasing a game and there’s no turning back, it hits hard.

I would include “ending toxic relationships”, “actively maintaining healthy relationships”, and “two-way communication of feelings” in that spot. I’ve failed at all of these at some point since we’ve created Accidental Queens, and I expect to fail again a lot.

The French administration and paperwork.

Giving credit where it’s due/taking credit when it’s needed. I don’t believe we’ve thanked the people who helped us during the creation of our two previous games, often or loudly enough.

But I also have a hard time believing that we’ve turned all that help into something worthwhile for everyone. That’s a moral challenge, finding that balance and feeling comfortable with it.

Working with the Unity UI system.

I believe success starts at the very moment we can sustainably start thinking about personal accomplishment in our work, because everything that comes before is safely taken care of.

Some questions are to be asked daily: “Will I be able to eat today?”, “Are we fulfilling the needs of the people who depend on this company?”, and “Do I treat the team, our partners, our players, and myself decently and with respect?”.

It’s hard to think about personal accomplishment when any of the previous questions are still hanging.

Reaching that privilege is my definition of success. Whether you fulfil your needs because a hit was released and cashed in millions, or because it was a passion project done on the evenings after a day job, it doesn’t really matter. By that definition, it’s a success.

'Success' is also having a set of values that makes the previous definition of success a positive one.

I believe the mobile games market has had an untapped potential since the first iPhone came around. Since day one, releasing an app on a mobile store was pretty much inaccessible to anyone who didn’t have a company, money and some technical knowledge. Not impossible mind you, but not particularly easy.

But making a game that reaches a huge amount of people still largely includes dealing with the mobile stores, crowded marketplaces that are either too strict on their guidelines, or not strict enough and flooded with clones or malware.

The mobile games ecosystem is as good as it has been since 2007. It even got better since the devices evolved and have become more powerful and packed with high-tech features.

The mobile games market is as bad as it has been since 2007. It gets even worse as irresponsible metrics-centred behaviour start to become the norm.

In that sense, the mobile games market has had an untapped potential since day one, because it had to compete, and quickly lose, against the bigger, scarier, mobile market as a whole; and it’s never going back.

Our latest game is called Another Lost Phone: Laura’s Story. It’s a narrative-heavy investigation game, that takes place inside of a fake smartphone interface.

You’ve found a lost phone and you can try to figure out what happened to its owner by digging through the messages, galleries and other apps on the phone.

It was released in September 2017 and is available on iOS and Android, as well as Windows, Mac and Linux through Steam and other stores, for around €3.

It’s the spiritual sequel to “A Normal Lost Phone”, our previous game, released in January 2017.

Exploring new forms of storytelling through video games was our starting point and it’s an endless journey.

Both games attempt to tackle socially impactful subjects, through the lens of their phone-based interface and storyline.

The disappearance of the owner of the phone is the explicit goal of the game, but ultimately both experiences are about these serious topics: coming of age, LGBT-phobia and gender identity for A Normal Lost Phone; and psychological violence, harassment and work/life balance for Another Lost Phone.

With our previous games, we’ve set some stepping stones for the future of Accidental Queens. Exploring new forms of storytelling through video games was our starting point and it’s an endless journey.

Using video games as a means to deliver a message and share our values is another big part of our studio’s identity.

Lost phones aren’t, though, and we intend to move away from that specific format. There are other interfaces that are not usually used as storytelling devices which bring their own constraints and possibilities, and we’re currently headed this way.

We are working on a project, but it’s far too early to say anything more than that: it’s an Accidental Queens project. The team changed and grew slightly, and our new teammates have brought skills and experiences that drive the studio even closer to what it aspires to be.

On top of that we’re trying our best to encourage other creators to, a) realise the power they wield when making video games and the responsibilities it comes with; and b) use that power for good.

What advice would you give to other developers on “making it” as an indie?

How do indie developers address accessibility in video games?

How can indie games developers make the most out of GDC?