We speak to Digital Melody, who won the first ever Big Indie Pitch at GIC in Poznan with their game Runventure 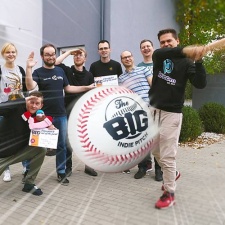 Today, we're speaking to Paweł Kitajewski from Digital Melody, who submited Runventure to the Big Indie Pitch at GIC in Poznan 2017 and walked away as Champion.

Paweł Kitajewski: Behind Digital Melody stand nine awesome people. Love for games and new technologies is something we all have in common.

Besides that we have our own individual passions thanks to which we are inspiring the other members of our team. Some of us are professional drone pilots, the other ones are speculating over Bitcoin, and we all love going out to the cinema to watch Star Wars sequels. Sometimes we even play golf.

Before starting every new project we ask ourselves two question: Would we play it? Has anybody done that before?

We asked both of these questions when we began working on Runventure. Our goal was to show a new approach to the way you control platform games on mobile devices.

Touch screens were designed to use them with one finger and yes, there are platformer games that have one finger controls, but in most of the cases you can control just jump while your character runs automatically.

Runventure shows that there is always place for improvements. We implemented a new control mechanics that we named “RunJumper Bar”

With just one finger the player can control direction, speed, the jump trajectory and have full control in a 2D environment. We then wrapped this up in what we believe is an appealing mix of popular vector graphics and jRPG elements.

Our protagonist is a fortune seeker and explorer named Justin Danger. His life is a never ending adventure. He wanders through mysterious and dangerous places like abandoned temples and haunted castles on his hunt for treasures.

In the first days of our studio our only capital was our time and effort. Our goal was to create games that we would like to play. In the beginning there were more falls than rises but we saw that as a natural process of learning what it means to start as a games studio.

After each failure we did everything to not repeat it and discover what really went wrong. We didn’t gave up at any stage, we were solving problems whenever they occured, we were learning the hard way.

Those were hard times but they made us who we are. People when obsessed with being successful are afraid of making mistakes. Paralyzing fear is the last thing you need when there is a lot of work to be done.

Don’t be scared of making mistakes. In fact, the sooner you make them the better.

The Big Indie Pitch is an excellent initiative, and pitching your project is an awesome experience. It requires you to take a more objective view about your work, which helps to highlight the key features you would like to bring before the jury.

It's all in the spirit of competition, but it helps you get a bigger picture of what you are doing. Pitching is also a very helpful skill that comes in very handy during the development process. Before developing a game we must be convinced that this is the thing we want to do for a considerable amount of time.

It’s much easier to talk about the game when it’s finished than when you have only some notes and illustrations on pieces of paper. During every stage you need to be aware of what you are doing, what are the key features that are important, and how you spent your time in the project.

The Big Indie Pitch was the first chance to show our game to the press and other people from the mobile games industry. Before that we had a chance to show it to our friends, we heard some warm words but we knew that this kind of feedback isn’t too objective.

I must confess I was a little bit nervous at the pitch. People back in the office were feeling the pressure, after 12 months of work someone was suppose to evaluate our efforts. I was playing cold, trying to act confident. I believe in this game and everyone who worked on it deserves to be proud.

Still I couldn’t have foreseen what feedback we got from the Big Indie Pitch. The jury's reaction was beyond my wildest dreams. Runventure stormed to the top spot of the competition as the best mobile game!

Following that event we spotted increased traffic on our webpage thanks to an article on PocketGamer.biz. We can also see increased interest in our work on social media. The Big Indie Pitch is an awesome experience and an excellent place to show off our game to the other people from the industry across the world.

During the preparation for the pitch I had rediscovered our game. It reminded me all the stages we’ve been through in the past 12 months. We will gladly participate in future events.

Runventure is our first platformer game that we have made at Digital Melody. We're curious as to how our approach to making something innovative will reflect among the players, and as to whether they will find the game attractive.

Right now the game is just going through the submission stage on the App Store. This is a really stressful time, we have 12 months of development behind us and now we can only wait for the official launch. We love all the games we made, they are like our children, we can only hope that people will feel the same.

All in all, we learned a lot during last year. Whatever happens we are the winners, we finished the project in the way we wanted. We need to be motivated because we have some big plans for 2018.

There are four mobile games on the way and we are also bringing some of our games to the home consoles (Nintendo Switch, PS4, XBOX One and Steam).

There is no vacation after Runventure, because we love what we do.

The Big Indie Pitch interviews: Tiny Corp talks being indie and coming second in the first ever BIP in Poland