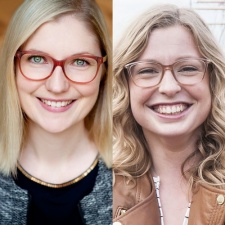 Influencer marketing platform provider Matchmade has made a number of key hires as the platforms reaches a 200 million subscriber reach.

The platform has indexed and analysed more than 200 million videos on YouTube and tracks over two million channels to boot. The database now also includes 20,000 games with a subscriber reach of 200 million.

As the company looks to take its next steps, it’s brought in a new chief marketing officer and chief financial officer.

Eeva Hattara (pictured, left) meanwhile, who has worked as Wooga and Aurelia Turbines in finance roles, has joined as CFO.

On top of this, Nonstop Games co-founder and investor Henric Suuronen has joined the company's board of directors. He labelled the Matchmade as “the Google AdWords of influencer marketing”.

The string of senior hires comes after a growth year where the company expanded its services across platforms.

“We launched into beta a year ago with the core feature set and support for free-to-play mobile games only,” Matchmade CEO Jiri Kupiainen tells PocketGamer.biz.

“Since then the platform has advanced significantly in terms of better analysis, matching, forecasts, search tools and usability, in addition to which we also now support all kinds of games.”

Kupiainen says after proving over the last year that the company’s approach to influencer marketing can deliver results for both content creators and advertisers, bolstering the business side of its leadership team “makes sense”.

“We also feel there’s a big need in the industry to talk more about best practices, set expectations and in general make things more professional,” he adds.

“And a big part of both their work is to help do that. We’re excited to welcome Eeva Hattara and Heini Vesander to the team.”

The influencer marketing space has grown significantly in recent years, and as Kupiainen puts it, is “on its way to becoming a key part of every game’s marketing mix”.

“It’s probably the most effective channel out there right now, in addition to which it’s also heavily linked with building a community around your game,” he says.

“Launching a game in 2018 without at least considering influencer marketing would not be a very smart move.”

As Matchmade moves forward, it plans to spread its platform support beyond YouTube. It also has eyes on building partnerships with more key players in the influencer marketing space.

Futureplay's Build Away! organic downloads up 110% from Matchmade influencer campaigns