Jeremy Shea on the success of Angry Birds Champions 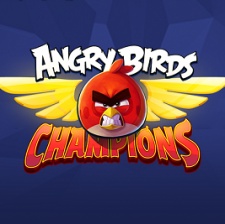 Last time we spoke to GSN Games, the social casino publisher was in the process of launching its mobile real-money competitive gaming network Sparcade.

An ambitious project headed by ex-Battle.net and Xbox Live Arcade executive Greg Canessa, it was an attempt to encourage a mass audience to play the company’s skill-based games by combining quality branded titles - Pac-Man, Tetris, Scrabble etc - with a community platform that made the most of games-as-a-service features across those titles.

It didn’t find that wide an audience, however, and was sunsetted. But from the ashes, GSN has found success with a more stripped down approach.

WorldWinner had been part of the wider GSN organisation since its 2007 acquisition, but the desktop social casino gaming portal hadn’t been launched on mobile.

The closing of Sparcade changed this.

Not only could Sparcade’s extensive backend services be reused, albeit powering a much simpler social component, but WorldWinner’s mobile app (currently just available on iOS in the US and Canada) also launched with Sparcade’s high quality branded content.

This formula has been further boosted in recent weeks with the launch of Angry Birds Champions.

Based around skill-based real-money tournaments, in the six weeks since its launch, this version of classic Angry Birds has generated over 400,000 games from over 2,500 unique players, with over $550,000 paid out in terms of tournament cash prizes and head-to-head matches.

“Angry Birds Champions is already the second most played game on our mobile app and the fifth most popular game on the WorldWinner website.”

Angry Birds Champions is already the second most played game on our mobile app.

The game’s mobile audience will no doubt also doubled when the Android version is released later in 2018.

Shea says WorldWinner is seeing typical metrics in terms of how mobile and web players engage with the game.

That means shorter, more frequent sessions on mobile, while more money is spent on web, although that’s partly also for historic reasons as WorldWinner is less established on mobile.

But no matter what platform, most players start a session with half a dozen or so free practice games before moving onto up to 20 real-money tournaments.

Although players can cash out their winnings, Shea says for the vast majority playing in WorldWinner is mostly about breaking-even, with the real-money stakes heightning the excitement of gameplay rather than providing meaningful winnings.

And it’s this, combined with the familiar brand and gameplay provided by Angry Birds Champions, which has succeeded while a high concept broader approach such as Sparcade failed.