“I set out to do this because it has a lot of potential and I figure it's worth the risk. And it is a big risk, but you've got to take those sometimes.” 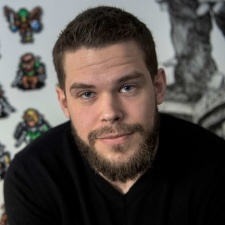 There are many different stories of how people got into the games industry. For some it’s a lifelong passion and the only career choice, some fall into it, while others decide they just need a complete change of career in the world’s most exciting creative sector.

One of the most unlikely and unique stories is that of Swedish Eldring Games founder Dan Olsson.

At a young age Olsson had aspirations of becoming a professional footballer, something he felt he had a realistic chance of achieving.

“I'd practice everyday for hours,” he tells PocketGamer.biz, adding: “I was part of the elite team in my city.”

Olsson’s promising football career was cut short however when he struck down by blood poisoning. He ended up in hospital and spent a year in rehabilitation.

"During that time I was depressed and really not in a good way,” he says.

It was during this time Olsson says he had the idea to make games. While he had some experience in programming, he would need to learn more to fulfil this new ambition.

“When I started I realised programming was a lot of fun, so I ended up enjoying that as much as any other part of it,” says Olsson.

So in 2009 he formed a company called DPFLashes Studios, which was renamed to Eldring Games in 2017.

For the first three games Olsson effectively worked as a one-man band, responsible for the design, art and programming of the titles. He had some help though from a character animator from New Zealand called Kurt Duane. The two still work together to this day.

One of the first titles Olsson developed was a Flash game called Clear Vision - now a series of titles - which was released on sites such as Addictinggames.com and ArmorGames.com. In spite of blood poisoning and dealing with depression, Olsson made the game a hit. In fact, it’s been played over 100 million times.

After a couple years of success on browser, he decided to move over to mobile, which again he had to learn from almost scratch.

His first mobile game, Clear Vision, reached the top three on the US paid chart. Olsson says it also hit the top rankings in 15 other major countries and retained a top grossing position for premium titles for more than a month.

Today, the Clear Vision series has more than 35 million downloads and an average score of 4.6 from 1.6 million reviews.

Clear vision for the future

Eldring is now gearing up for the latest entry into the series, Clear Vision Online. The online multiplayer sniper game has players building up their own defensible bases, and attacking others.

Players can recruit guards to defend their base, and can arm up themselves with a host of customisable and upgradable weapons and ammunition types. In total, Olsson claims the game has 93 million possible configurations for players’ loadouts.

The self-funded title, planned for a summer 2018 release, has been in the works for over 18 months, suggesting a significant investment and confidence about its fortunes.

“I set out to do this because it has a lot of potential and I figure it's worth the risk,” he states. “And it is a big risk, but you've got to take those sometimes.”