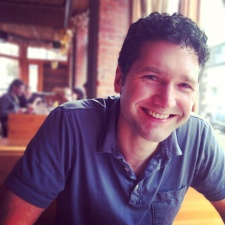 Stuart Denman: I’ve been a game developer for about 20 years, working mostly on triple-A action-adventure games on consoles. This is the first game I’ve designed and made mostly on my own, but I’ve had help from my wife Paulette and I hired my old colleague Kristoffer Larson to do sound and music for Tiny Bubbles.

My games are inspired by the strange patterns and structures in nature. More specifically, Tiny Bubbles is inspired by my grandfather's scientific work on soap bubble foams in the 1950s.

My grandfather had tremendous influence over me as a boy, spending summers with him out in the woods of New England.

My "holy grail" as a game designer is to create an original game mechanic, like the 1980s classics first did: Tetris, Lode Runner, Frogger, etcetera.

So when I was brainstorming unexplored areas of gameplay, I started thinking about my grandfather’s work with soap bubbles.

Tiny Bubbles is an organic puzzle game about manipulating clusters of soap bubbles in a microscopic aquatic world. There are 172 puzzles in seven worlds with over 15 hours of gameplay.

Each puzzle has a different goal or strategy that you have to figure out. Using a queue of moves, you tap the bubbles to fill them with color or cut the edges to mix neighbors. The basic strategy is to line up four or more of the same colour bubble to make a match, but doing this involves using the bubble physics, which has unusual behavior.

The edges act like rubber bands while at the same time the air inside pushes out.

It’s difficult because it seduces you with it’s relatively low initial production costs and game development can be quite fun to do. But then you realise it’s going to take a lot longer to make a commercial product.

I find it really hard to balance my time between social media and marketing versus simply working on getting the game done.

Fortunately my wife Paulette does a lot of work to help get the word out and all the awards we’ve won help us with exposure at a relatively low cost. Not all indie developers have that, we are very fortunate and thankful.

It was a total rush. My adrenaline was pumping like crazy. Not so much out of nervousness, but just how little time you have. You want to show everything!

It was a very fun process and well organised. It was also a great opportunity to meet people and get feedback on Tiny Bubbles from experienced industry veterans.

I think Tiny Bubbles was a successful experiment for me in seeing if I can play around with something totally different and find fun in it. I want to keep doing that. Sometimes that takes a lot of effort because not every idea can be prototyped easily.

I’ve also met a lot of other great indie developers by going to showcases and events that I wouldn’t otherwise. There are a lot of really great games that end up being “hidden gems” because they get lost in the tsunami of games being released every day now.

The thing I hope for next is that people will get a chance to play Tiny Bubbles and see how fun and addictive the game is and then tell their friends about it.

We’d love to be noticed by the Apple and Google editorial teams, since featuring is critical to success these days.