The Big Indie Pitch interviews: Limestone Games tells us all about their stylish anime-inspired Aeon Must Die! 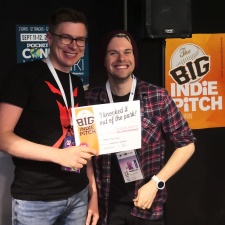 Yarl Bringa: Limestone games currently employs 11 on-site staff. You could say it’s a rag-tag group of highly motivated individuals, but during development we became a real team. Members sometimes fulfilling multiple roles, playing on each others strengths growing as individuals and as a collective.

We believe that games are an emerging art-form, not just a way to make money off customers but a way to deliver a - hopefully enlightening - message. We want to make our mark on this young medium while looking back as far as ancient classical works of art to modern visual media for inspiration.

Aeon Must Die! is a game that turns the beat-em-up genre on its head introducing breakneck risk-reward gameplay, innovative tactical fighting favoring brains over reflexes, and an RPG alignment system that tracks how you behave as a warrior and changes the challenge and story accordingly.

The ruthless, grim but colourful world looks and feels like that ridiculous action-packed anime VHS tape your parents heavily disapproved of. Go on a violent journey with a disgraced symbiotic emperor, a fuel-blooded amnesiac with a hole in his head and a sentient hoverbike.

I would like to tell a story that it is all sunshine and roses, but I would be lying. It is hard. On every step of the way, be it skill hunting, funding or even general stress survival. But, it makes us better and stronger as a whole.

In indie development, being a team is not enough, you have to be the team to survive. I am proud to say that Limestone Games is currently on this exact track and are ready to conquer even greater heights.

It was really nice to be able to pitch an outstanding product like Aeon Must Die! game at Big Indie Pitch. In a way the majority of the work was done by the team in preparation for the event, so I only needed to highlight two to three features and I could immediately see that the judges’ eyes lit up with excitement and interest. With great back end, pitching is easy.

Overall pitching gave an opportunity to understand the quintessential strengths of our project.

n future we hope that pitching would lead to some publisher/investor/platform holder approaching Limestone Games with a lucrative mutually beneficial offer. Being a true self-funded indie project, any scenario of the above mentioned would be nice.

Right now we are fully concentrated on Aeon Must Die! Since the IP is unique and deeply thought through and all the story cannot fit into even a triple-A multi-million title, we are considering further installments down the road if we find our audience.

We would also like to produce some other games that we have on the shelf, unrelated to the Aeon Must Die! title. In general, Limestone Games is here to stay in the game development industry.

Aeon Must Die! walks away with the first place prize at the first ever Big Indie Pitch at GameDevDays