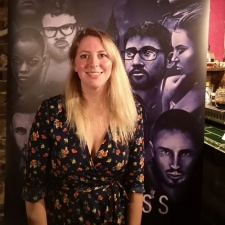 Lauren Carter’s journey into games development is a rather unusual one.

Long before founding her own studio Narratio, Carter was an RAF pilot. But despite a love of flying, she left after earning a scholarship in Vancouver for a Masters in Creative Writing.

And part of that course included a module on writing for games.

“I never really thought about it before,” Carter tells PocketGamer.biz.

“During that course they asked us to come up with a game that you would like to make.

“It just totally didn't go anywhere and I was like 'I'm never meant for games it's never going to work out'. And then I moved back to England and started working in production.”

Carter has worked in production for a few years now, helping create TV commercials and other online content for various clients.

But the key issue for Carter was that while she wanted to create, the creative process often meant more compromise than she would have liked.

“You spend the whole time battling between what the client wants, and then obviously you're trying to run a business so you have to be kind of appeasing, and you end up with a product at the end that isn't really what you want as a creative and isn't really what they wanted,” admits Carter.

Carter decided that to scratch that creativity itch, she would step into games with her own studio, Narratio, where she began work on her debut title Powerless.

Recently released, the title is an interactive fiction experience about a major catastrophe that sees the world lose electricity.

Players take on the role of various survivors in a simulator, guided by an AI called MAUDE (Mobile Assessment Unit of Disastrous Events) and must make key decisions that can affect the outcome of their personal stories - and in some cases whether they survive the disaster and its aftermath or not.

MAUDE will judge you on your performance, based on honesty, selfishness, bravery and resourcefulness.

I didn't want to do freemium because the thing with narrative is it's really annoying if you have to wait to then finish the story.

While only ever showing text during the action, the game’s music does an excellent job of ratcheting up the tension as each new line of text appears, combined with the knowledge that each choice could have drastic consequences.

It’s not always life or death though. Some stories deal with smaller situations to get a feel of what the day-to-day of life in a post-apocalyptic world would be.

The current setup of various adventures for different characters works well, but it’s different from the initial scope of the game, which was much larger.

“Initially it was based on a tube map and you could go to any station at any point in time during this apocalyptic situation,” explains Carter.

“So day zero obviously had to feel different to day 20. And the kind of disaster this is, the lack of electricity, the decline of services and infrastructure would be so rapid, it's very different each day.

At this point, Carter decided to refocus the game to deal with the issues she felt are most important to the subject matter.

“I've always been really interested in survival stuff,” says Carter. "In my bag, at any given time, I will have a number of items for the apocalypse. Whether they're useful or not is anyone's guess but I like to feel like I'm prepared for stuff.

“I think most people nowadays are so disconnected from that way of thinking and the natural world. Most people, in London, if you asked them if they know how to make a fire or purify water, they would really struggle.”

Powerless, which is out now and is already set an imminent new content update this week that also aims to fix a few minor early bugs, comes with a premium price tag of $4.99.

Carter says she adopted premium rather than free-to-play due to the game’s narrative focus.

“I didn't want to do freemium because the thing with narrative is it's really annoying if you have to wait to then finish the story,” says Carter.

“I don't want that cliffhanger thing and also I don't think I have the infrastructure as an indie to manage that kind of stuff.

Powerless is available now on the App Store.