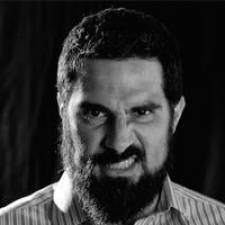 Today, we're speaking to Mike Doom from Built Games, who submited Spellfast to The Big Indie Pitch in Los Angeles 2018 which took place during E3 week and walked away as winner.

Mike Doom: Hi I’m Mike Doom, a game dev since 2005 and will be until I die or can figure out the age problem. Current interests: Studying how we tick, surfing, cycling, trapeze, drawing, coding, and intense music. I run Built Games, lead design, and help with whatever else needs a seasoned set of hands. I’ve wanted to make games since I was 9 (because of Joust on 2600). Started with illustration and animation, then transitioned to coding and math-based stuff. Graduated Digipen class of 2005, a fun year, then made a gaggle of games at Warner Bros., Disney, EA and Zynga. Made every game under the sun from Caddyshack to SimCity to Spore to Scrabble to Casino games and a bunch more. One year shipped 16 games (whaaa!?), made B&W Kindle games, and started EAs first free-to-play studio in Beijing; 你好北京朋友! Video games have allowed me to travel the world from China to UK to Colombia. I’ve been living the indie dream since 2014, and hot damn it’s tough as nails!

Luckily I have my good friends to DIY this beast. There’s Kevin McKinney who is my other half; brash, loud, and part of team GSD (Get Stuff Done). He fires out games faster than a machine gun with the award winning bullets. Then there’s Jay Guevarra who a publishing king from UA to marketing to product management; he crushes it all. AND he is literally the best Spellfast player in the world; no joke, challenge him and you WILL lose. And there’s Brad Harrison leading up tech. Long time coder, full time badass. From Consoles to Mobile, Brad has seen and shipped on it all from NHL 2000 on PS1 to Hawk on the Wii to Teletubbies on mobile phones… and everything in between.

Finally we have our team, a colorful crew of misfits who help with every strange task we can come up with. We’re based in LA with a strong pod in Mass; coincidentally where Kevin is from. So much Boston has been had. We’re self funded and work with a bunch of really fun partners to keep the lights on; one just had us at San Diego Comic Con showing off an Impractical Jokers game called Wheel of Doom! Serendipitous huh? truTV rocks. Good people there.

We do all of this because we’re working toward making the world a better place through fun. We believe people are more productive and enjoyable when they are having fun. We like to make your day brighter by putting by putting a bit of good fun in your life.

Spellfast’s story starts back in 2014 at a self-organized 24-hour game jam with a few of my old my DigiPen classmates who rock. We pulled words out of a hat, mad libs style, to come up with a real time PvP word game. It was a blast to make and play. It was more just for fun, so we went our separate ways back to our normal lives. Years later it hit me how to make it touchscreen and Spellfast was born. With my friend’s permission, we made it into a real game.

So what is it? Think Street Fighter meets Scrabble. Weird right? Yeah it is!

Form words from tiles on a rack and throw them at your opponent with skill and speed. The longer the word, the faster it travels. The more complex, the strong it hits. It’s simple to pick up, hard to master. And the coolest part is you learn words through brute force. The larger your vocabulary and the faster your brain moves, the better you do! It surprisingly improved my vocab, spelling, and anagrams. I think it can for anyone who plays daily.

We really think we have the beginning of an eSport. Not just that, a casual eSport that is super easy to watch for anyone; not just a hardcore MOBA or FPS player. We think this game can be as big as the biggest word games out there if not bigger. Check out our stream and youtube for some cool matches.

It currently also support several languages and dictionaries. So far English, UK English and Spanish for dictionaries. I translated the game in Spanish after learning it with Duolingo, so be nice if there are grammar mistakes :-) I think this maybe one of the first cross-language games who directly fight with their words. I can’t wait to see what type of neat data we can share with our Scientists!

And this is just the start. We’re adding in a TON of stuff like realtime chat, avatars, hats (yeah, they’re so in), and power moves! Whoa. We’re updating the whole tile system so your titles can customize your tile’s look. Tres chic.

It’s brutal, but what can you expect from a mature market? Me toos are all over the place, Unity/mobile has brought in a new swath of creators (aka the few Flash), the industry is rife with consolidation, user acquisition is incredibly expensive, and getting any promotion from platforms is quite challenging even with branded product. So many of our friends go bust and it’s heartbreaking. The only way we’ve figured out to make it work is to dedicate yourself to the craft and business… and do work for hire. Investment is pretty dry/onto the next thing.

This biz is not for the weak of heart and it takes a constant treadmill of hustle. My personal life has vanished and paying the bills is always a fun topic of conversation, but you know what? We’re doing it and are getting better every year. We’ve released some real gems doing it our way. That’s important to me. We have released a Teletubbies game that teaches kids to speak, the next gen spelling game, a game with Viacom that rates how high you are, and we are working on a Bill and Ted’s Excellent Adventure game and a Terminator Game strategy card game. All innovative, all mass market, all fun.

It was fantastic! The event was well organized, the review group knowledgeable, and the beer was excellent. Our B2B game has dramatically increased since the pitch and we have recommended our indie friends to participate. I hope my big biz friends who have read this far also take note to participate. There were some gems to check out who didn’t secure a booth somewhere on or off site.

I gained a ton of new friends and business opportunities. Best of all I met the dude who coded Thrillkill! Oh man. How cool.

We hope everyone downloads Spellfast and lets us know what they think. Check out our other games and sign up for our betas.

My main ambition is to grow Spellfast into the next generation Scrabble/Words with Friends as the world’s first casual eSport. But you know what, as long as I draw breath, I’ll be making games.

Next up are Bill and Ted’s Wyld Stallyns, a time travel adventure with the most excellent duo, and Terminator Survival, a different type of survival game with card combat, location awareness, and Skynet coming to kill you every step of the way.

Lastly, to really make good on education, we’re starting a new channel to help disseminate what we know throughout the industry. Check out our weekly video blog for more!

The Big Indie Interviews: We talk AR escape rooms with The Pixel Crushers