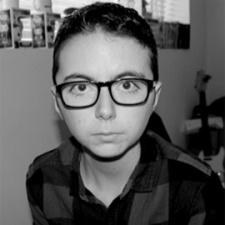 Born in Hertfordshire and studying in Staffordshire, Nisbet is a trans guy with a huge passion for making games. Whilst currently working on the transgender awareness game, Transhaping, and inputting his own experiences in the game, he is also using Unbound Interactive’s following to raise money for charities that support the trans community.

Ryan Nisbet: Unbound Interactive is an indie studio based in Staffordshire, UK. The team consists of three university students who became friends in their first year and have stuck together since.

Our aim is to make unique games that cater to a varied audience. We're currently working on our first game which aims to educate people on the issues that transgender people face on a regular basis.

My usual day consists of making assets for the game we are developing but also keeping an eye on social media and interacting with our community.

As well as this, I keep an eye out for any issues currently facing the trans community so I can make people aware of this on our social channels and support the community.

I started off as a website designer and I didn't even think about getting involved with the games industry until the idea of creating the company was mentioned.

I have a huge passion for games and my original job title was going to be website designer. However, we lost half of the company before we even started, being left with three people.

This meant we hired an external website person so I could be more involved in the creative process of the games. Since then, my passion quickly shifted from websites to making games.

Just try it! You don't need to know the ins and outs of it if you have people around you that are willing to show you the ways. Network with people in the industry and get some tips from them.

At the start of the past 12 months we saw the massive up-rise of the (very controversial) battle royale genre.

We're currently working on our first game which aims to educate people on the issues that transgender people face on a regular basis.

Personally, I have been playing Fortnite since this happened and I love the game. I love the fact they are constantly updating the game with new unique items.

Alongside the rise of Fortnite, we saw the fall of Playerunknown's Battlegrounds due to its loot boxes and bugs. I never played PUBG due to it's bugs so I can see why the game fell so fast when the free-to-play Fortnite came out.

Due to Epic Games' recent additions and changes it has implemented into Fortnite, and the game dominating the battle royale market right now, I feel that Fortnite will slowly lose its player base over the next couple of months and the battle royale genre will be taken over by a different one.

With games coming out such as Cyberpunk 2077 and the new Elder Scrolls, I think that open-world RPGs will make their comeback.

As well as this, we have the release of the much anticipated Super Smash Bros. Ultimate which will encourage more of the younger generation of gamers to get into fighting games.

I haven't been in the industry long enough for there to be a lot of change.

I'm looking forward to getting out of my comfort zone. I'm an incredibly timid person and I rarely have the confidence to network with people.

I'm looking forward to being able to network with people in the industry and also spread the word about Transhaping.