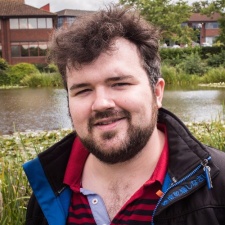 Since completing his PhD in identification and ethics at King’s College London, Buchanan has worked on a variety of bestselling, award-winning video games, including the acclaimed 30-hour story update No Man’s Sky: Atlas Rises and its subsequent release, No Man’s Sky: NEXT.

Waypoint called the Atlas Rises story a “glimpse into the future of games” while GQ said it was the “most cohesive and intriguing tale that the game had delivered so far”. In early 2018 he was named in GamesIndustry.biz‘s Top 100 list.

Buchanan is also a comics writer and novelist. He is represented by Sam Copeland at Rogers, Coleridge & White for an upcoming literary thriller.

Greg Buchanan: One of the chief considerations for the writing and narrative design of mobile games is time: both the limited amount of time a player may be willing to engage with a story in each play session, and the use of timer mechanics as a way of driving monetisation and retention.

In this talk, I'll discuss how these apparent story constraints can actually be viewed as opportunities if we alter the types of narrative we are attempting to tell.

The talk will provide attendees with several practical ways short bursts of narrative content and associated time mechanics can be used for compelling and innovative game narratives.

Could you tell us a bit about your work?

As a freelancer I've worked on over 20 games in the past three years, writing and designing narratives for a number of companies across indie and triple-A.

More games and titles I've worked on can be seen here. I was also one of the voice directors for Divinity: Original Sin 2.

It depends on the project, the studio and point at which I'm brought on, as it does for most writers and narrative designers who work on a freelance basis.

Roughly speaking, I'll often help propose the overall story design and universe setting for a game (or, my specific bit of it if it's a pre-existing IP).

As the project develops, I'll write the script for a game's narrative components, potentially hiring other writers and editors to work with me, whilst ensuring this script works in harmony with the emotions a game evokes in its players as much as possible.

I'll work with other members of the team as an advocate for narrative, shepherding the story vision across various disciplines while ensuring I'm altering my own work to fit what others are doing at the same time.

I'll then frequently switch to playtesting or assisting implementation, when a contract has hired me to do so, in order to further revise the script.

Now, this all alters depending on what stage I'm brought on; sometimes I'm involved very early, sometimes I'm brought in at the very end to completely alter a pre-existing script, in which case I will quickly assess what the project's constraints are in terms of assets, level design, and already-implemented story, and work to use these constraints to create the best new script possible.

My PhD looked at how we engage in the processes of building and relating to characters in traditional 'linear' media like novels versus interactive media such as games.

In addition to my own enjoyment of the medium, I became fascinated by its possibilities and the increasingly exciting choices and manipulations of genres presented by a lot of titles and wanted to create some of my own projects.

After a short 15 minute game about Brexit (released just a couple of days prior to the referendum) was picked up on a bunch of sites such as Kotaku and RPS, I ended up receiving job and contract offers from a variety of Guildford studios before beginning to freelance across the world.

It is tough to become a game writer. It's an incredibly competitive field to get paid work in and you will fight the doubts of yourself and others along the way. Determination and resilience are required.

The good news is that it is possible, and that if you a) have talent/skill (something which can be honed and improved over time) and b) maximise opportunities for that skill to be noticed by going to conferences and getting yourself out there, someone, sometime, someplace will hopefully give you the chance you need.

Don't wait for permission, don't think conditions need to be perfect for you to get started. Just get started.

We're entering a fascinating phase of maturity for mobile, reduced expectations (but simultaneous acceptance / lowered pressure) for VR, and the rise of new stores to reduce the impact of Steam's current grip on the market (particularly for indies).

It's my hope that algorithmic, hands-off thinking will stop crushing the financial and creative dreams (and play experiences) of many, and that with new players involved in all these markets, we'll increasingly get some great fun worthwhile titles that are actually discoverable and which sustain more titles to come.

New platforms such as Amazon Alexa will provide increased opportunities for game development, perhaps as part of partner apps if sustainable. We're in this sort of 'let's try this rough idea' experimentation phase and greater imagination and boldness could reach new audiences of millions.

Certainly many feel increasingly conscious of the impact of poor working conditions upon the health of game developers in a way that makes them feel uncomfortable with engaging with titles produced under intense crunch.

While in some extreme cases fast-paced work and longer hours may be necessary, a large amount of crunch results from poor planning and wasted ambition - not only does it hurt workers, but it's often co-morbid with other perhaps hidden difficulties in production processes and will inevitably affect a title's quality.

Even if some companies do not care about their employees' health, they should see the long-term business case for better work and production processes. Burnout serves no-one.

Catching up with friends and making new acquaintances - these events usually end with new opportunities and that's great, but even better for a freelancer such as myself is emerging from my cave and socialising with real live cool people