"Outside of gaming, people want to give back to charities at key times of year such as Christmas, Easter and Thanks Giving, and I believe that this behaviour should be captured in-game too" 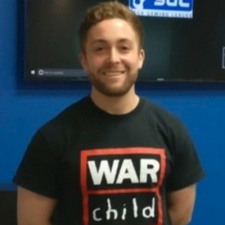 In today's Speaker Spotlight we're talking to War Child gaming partnerships executive Adam Holmes (Pictured, main), who will be giving a talk centred on how mobile games are giving back to charities, and why their players are enjoying taking part in charity-themed in-game events.

Prior to working at War Child, Holmes worked at Gameloft where he launched its advertising solutions in the UK. Before that, he started his mobile gaming career at SuperAwesome; a 'kid-tech' startup focused on child compliant advertising.

War Child has a heritage of raising funds and awareness by collaborating with the music and gaming industries. From long-standing supporters such as Sports Interactive and 11Bit Studios to recent partnerships with Social Point and Gameloft.

All the support helps War Child to protect, educate and stand up for the rights of children caught up in war. To date, we have raised over $3 million through collaborations with the gaming industry.

I collaborate with the mobile gaming industry to raise funds and awareness to support children affected by war.

The mobile gaming industry is incredibly fast moving, and new business models can be created and iterated on rapidly, making it such an exciting area to work.

I believe as the mobile games industry matures, it has a tremendous ability to do good and to create change, and we're just scratching the surface.

Build your network, take the time to attend events and seminars and try to immerse yourself in the industry.

The mobile gaming industry is in a great position; we continue to see innovation in genres that were previously considered saturated and hyper-casual games have allowed new gameplay mechanics to break through.

I've personally enjoyed seeing a return to fresh gameplay mechanics, whereas in 2016 and 2017 it felt like the majority of successful games were reskins.

As mobile gaming companies continue to refine their live-ops, I expect more mobile games to run charity-themed events and updates in their games.

Outside of gaming, people want to give back to charities at key times of year such as Christmas, Easter and Thanks Giving, and I believe that this behaviour should be captured in-game too.

One of the most interesting changes since I first started in the gaming industry is the acceptance of mobile gaming from non-gaming brands.

From ITV's Love Island: The Game to Netflix's Stranger Things mobile game, major IP's have changed their strategy to have a mobile gaming presence.

This is true of War Child too, six years ago the idea of charities having a presence in mobile games was almost unheard of.

Attending a number of insightful sessions, as well as catching up with some of the amazing gaming companies that have supported War Child.