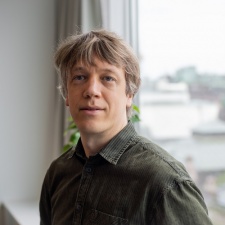 This time we spoke with Next Games’ director of technology Matias Ärje.

Matias Ärje: The job title is the director of technology, which sounds quite grandiose and ambiguous. In practice, I help game teams to be effective. I work on the application and service architecture, reusability, processes and managing cooperation with external partners and subcontractors.

It is a lot about enabling game teams to concentrate on making the game instead of the basic infrastructure and building blocks that every game needs. Having a standardised high-level architecture sure helps there.

I started programming at the age of seven with VIC-20. Many of the things I wrote were simple games. Often though, the computer ran out of memory when I had only a fancy title screen. I wrote my first commercial program at the age of 10.

I’ve always been interested in games but did not really know what to expect in larger-scale game production.

At the turn of the millennium, I co-founded an IT start-up. It was a time when everyone had their own in-house web content management system and that company was quickly acquired by Innofactor. I was with them for about 15 years and did a lot of different stuff, including multi-channel publishing and brand management solutions.

During that time, it grew from a few people to a publicly listed company of 450 employees. I happened to read Masters of Doom, which had a huge influence. My friends were starting a new mobile games company, so I joined then and assumed the role of the chief technology officer.

We concentrated on mixed reality games, using real-world elements such as weather as part of the gameplay and released two games with modest success – which included soft launching a location-based animal collector one month before Pokemon Go. We started collaboration on a prototype with Next Games, which soon acquired the company. That game prototype became The Walking Dead: Our World.

Vaguely. I’ve always been interested in games but did not really know what to expect in larger-scale game production. Especially everything that relates to location-based gaming (something we have become very good at) and the sheer scale of literally turning the world into a game level has been something I would have never imagined.

We actually did our own world map processing pipeline, with a lot of advanced geometry, building tessellations, shoreline simplifications and such. However, we opted to cooperate with Google when they started developing the game's extension to its Google Maps platform a few years ago.

Being deeply involved with that has also been something I could never have anticipated and you can see the results in Our World. I am really happy how it turned out.

Computer science at Aalto University. It’s important to have a solid understanding of the foundations but there are also many other layers in the role.

These include managing cooperation, minimising damage when something goes badly wrong or understanding long-term implications in a complex environment. I’m not really sure if there are any courses that can do more than point to the right direction.

It’s a combination of autonomy, purpose and mastery. Autonomy is well catered for in the workplace culture of Next Games. We have a lot of freedom to do things as we best see fit, but that naturally comes with accountability for your decisions.

Understanding live operability, integrations and roles of huge systems and all the related processes seem to continue gaining significance.

Purpose comes from getting the results of your work into the hands of millions of people, hearing back from players and from statistics like “our players have walked a total of X million kilometres while playing the game”, so at the extreme there is even the possibility of having improved the quality of life of someone through encouraging them to walk significantly more.

And the final part, mastery, comes from being really good at your job and accomplishing things that are completely novel. The weird intersection of cartography and gaming provides a lot of such opportunities since it is largely uncharted territory (bad pun intended). But there has been a lot of chances for other cutting-edge development at Next Games as well.

Many people, even those working on IT, might not have thought how multifaceted game development is. Though all individual parts are definitely represented elsewhere and may feature stricter requirements such as quality in medical software, I would argue this is a field that has the most comprehensive cross-section of different aspects of software development. This is especially true if you consider all essential functions such as live operations.

There is, of course, that familiar sentiment of knowing traits years prior, yet that happens with everything. Apart from that, the surprises have been completely positive. I have absolutely no regrets in leaving the ‘safer’ consultancy scene.

Understanding live operability, integrations and roles of huge systems and all the related processes seem to continue gaining significance. There can also be relatively fast changes in the dominance of game engines, delivery platforms, etcetera.

So in the long-term, it might not be the best bet to understand something extremely deeply at the expense of having a wider knowledge of different subjects. That doesn’t mean you shouldn’t specialise, just don’t lose the overall picture in the process.

Helsinki developer Next Games is hiring a Full Stack Developer