PGC Helsinki: Jussi Autio from Resistance Games will discuss whether the fashion for indie publishing has ended 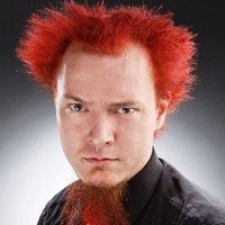 In this speaker spotlight, we caught up with Jussi Autio. Autio is a mixture of game designer, business developer, educator and consultant. He’s been in the game industry for 14 years and has founded 4 companies and helped 13 game companies get established. His designs have won multiple awards. His games have been awarded just the same as the education model he designed - the best youth incubator in the world.

At PGC Helsinki he'll be part of a panel session discussing whether the fashion for indie publishing has ended.

Jussi Autio: Resistance Games is a PC strategy game studio from Northern Finland. Founded by 8 seasoned developers with average experience of 15 years, Resistance is working on a fully funded, unannounced title for a publisher that has been around for 30 years. Currently 13 people strong, Resistance is looking to grow to sustain two parallel projects in the near future.

What does your role involve?

As a Creative Director I work as a lead designer on our game, but I also participate strongly on sales of new projects and the management of the studio.

First of all I have been gaming since I was 5. Even though I did make my first games in my early teenage years, it was only in high school that I realised I wanted to give it a shot to the game industry. It includes my other love - history. By high school I had read Grimberg's 25-book -series on the history of humankind and knew quite a bit about the history of the world.

But a single game, King of Dragon Pass - showed me true power of games. It taught me about Glorantha, about its social codes, morality, mythology, what each god represents and what it is to be a good person in that world. I realised that I know Glorantha better than Greek mythology which had been taught at school and which I've read books on.

Then I realised that games as active art form is potentially more powerful than passive art forms. And I knew I wanted to make games for a living. To touch people and change their perspectives on life. Still to date, David Dunham, the creator of King of Dragon Pass, to me is the ideal game designer. Thanks to Northern Game Summit last year and David's upcoming game, I got to bath in sauna with him and tell him in person the influence his game had on my future.

What advice would you give to anyone looking to get into making games?

The main thing is to make sure you have a main skill that will help you get a job in the industry. Expanding your vision to other fields is great, but knowing a bit of everything doesn't open doors yet. Jack-of-all-trades is a difficult path and any successful "single hero developer story", even if they all fascinate us, hide behind hundreds of failed ones.

But the best part about game business is that the longer you stay in the business, the easier things become. Not necessarily business-wise as everything changes constantly and competition is ever more fierce, but the demand for your skills will improve. So make sure you're constantly learning and advancing. Stay passionate, and stay open minded.

The mobile business is so saturated and dominated by a few hero companies that unless your team is also a hero team who can attract 8 digit investments, then you have no hope to survive there among the other 2.7 million games.

Indie development in mobile is dead and it should be pronounced dead so poor indie developers wouldn't bankrupt themselves and ruin their lives in the process. While PC is getting saturated as well and Steam Direct has opened the dams even beyond what Greenlight did, 35 000+ games is not 2.7 million.

I suspect that the same thing will happen that has happened every time a new platform has brought millions of new players who have never gamed before. At first their weight turns the trends towards more casual experiences. But as they game, get familiar with games and become more committed gamers, they start demanding deeper, more complex games and the trend changes towards midcore. Now millions of casual mobile gamers have been gaming for years, so I suspect the trend will continue to turn more midcore.

Dramatically. As I joined, digital distribution in general was new and revolutionary, but most examples of successful companies still operated via publishers and boxed copy sales. It was only a couple of years later that Unity came and was the first good-enough engine that indies could afford.

The first 3 games I was involved with we still built everything from scratch. Although we had tried Ogre3D or whatever it was called and decided to not to use it, the increase of productivity when we adapted Unity was huge. Then PC gaming was supposed to die, Facebook games the only way to go, then console games was supposed to die and mobile was the thing. Then there was the race to 1$ pricing and...

Hosting a track, as it seems to be what I'll be doing on top of the panel.

PGC Helsinki: Alina Gribanova will be on a panel discussing trends in global publishing and business

PGC Helsinki: Jelle de Jong from Game Transactionz will be talking about monetisation through competitive play

PGC Helsinki: Aurelien Merville will be part of a panel discussing mergers and acquisitions at the show

The Science of Decision Making: How to use Data to Make Better Decisions | PGC Digital #1