"Once you’ve started, it's just a matter of pushing forward" 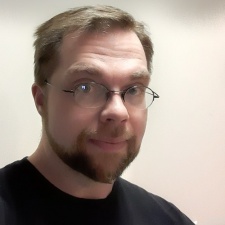 Daniel Guertin is the creative director at Behaviour Interactive

Daniel Guertin: I am a creative director on an upcoming project at Behaviour Interactive. My main task is to uphold the game's vision. In other words, I make sure that the entire team is working together to build the experience we want to offer to our audience. Are we creating the right emotions? Is the game living up to expectations? How can we make it even better? Is this fun? Those are common questions I ask myself every day.

There are so many facets to video game creation that there are thousands of possible career paths.

I started out as a pixel artist, mostly doing level art for Game Boy Advance titles. I loved getting involved in the design process, so much so that I was assigned with the creation of entire levels. As I was learning the basics of game development, I decided to apply for junior game design positions.

Following this, I spent years learning my craft until I became lead, showing new designers the ropes. I finally moved up to a creative director role, so I could keep mentoring my design team but also work closely with the other disciplines.

Not at all. I always loved video games, but up until my late twenties, I believed it was impossible to break into the industry - that was until I started trying. It was very difficult at first, yet I felt like I had found my place and eventually started to believe that I would be able to make it.

I have a college degree in computer engineering and learned game design through books. Although I don’t like programming, my studies helped me understand how to use development tools and give meaningful feedback.

I advise taking at least one programming and one 3D modelling class. With these, you'll see two major aspects of video games: that software is dictated by logic and programming, which is used to bring creative and imaginative ideas to life, and two very different aspects of video game creation. You can then start identifying what you like or don't in the process.

There are so many facets to video game creation that there are thousands of possible career paths. To find yours, try to identify what you like and don't like doing. Once you know that, you can look for education in that particular field.

Bringing joy to players around the world. As an entertainer, I live to see players react to my work. Knowing the user has had a good time playing my team's creation is beyond words.

I often tell aspiring designers that the trick to getting started in video games is just starting.

Game design is often misunderstood as being portrayed as only designing the game's visuals. While they do walk hand-in-hand, it's less about how things look and much more about how emotions are woven into a playable experience.

Video games are stories lived by players. A game designer's job is all about crafting the verbs that the players will use to play their own stories. It's a subtle job and as the saying goes, when we do things right, players won't be sure you did anything at all.

Video games are a form of entertainment that is both a giant business and a form of artistic expression. Sometimes all at once, sometimes just one side at a time.

If I could go back in time, I would tell my younger self that the road to a successful career in game design is to accept that sometimes it's all about the business, sometimes it's about the creation but it's always about entertaining the players. It would have saved me some needless arguments with managers as well as heart-crushing playtest reports.

My advice stems from Mortal Kombat 3: "There is no knowledge that is not power". Well, technically, the quote is from Ralph Waldo Emerson, but it's more fun to have it associated with spine-ripping mechanical ninjas.

Back on the topic, it's okay to make mistakes. Whenever you stumble, you learn. So, if you want to enter the world of video game creation – do it! Don't be afraid. Search the web for tutorials, find a game engine and make games. Watch people play them. It will be hard but you'll learn. All the knowledge you gain will give you the power to do the job you love.

I often tell aspiring designers that the trick to getting started in video games is just starting. Once you've started, it’s just a matter of pushing forward.

Jobs in Games: Ludia studio art manager Serge Mongeau on how to get a job creating art for games