"It's very frustrating when you know how popular gaming is" 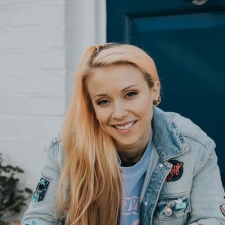 In the lead up to International Women Day - taking place on March 8th, 2020 - PocketGamer.biz is spotlighting a number of women from the games industry under our Jobs in Games series, all this week.

Each profile will bring along a certain set of expertise, a different background, and a wealth of knowledge to be shared with all. Most importantly, for women looking to join the industry, there'll be some key information on how to get started, and key bits of advice for making the jump into games.

Today we are speaking with freelance presenter and host of the BBC's 'The Gaming Show' Julia Hardy regarding her work over the last decade and how she has been trying to convince mainstream media that games coverage is worth investing in.

Julia Hardy: I am a freelance presenter hosting anything from TV shows, radio, podcasts, live events for all manner of subjects, but mainly about video games.

It’s so much easier now as you can reach out to anyone and find out a wealth of information, from jobs, to how to host, to how to get yourself noticed.

I was a host for a rock music channel called Rockworld, and one of the shows I hosted and produced was a review show. I was (and still am) really into games and movies, so I asked if we could review these too. That was the first time I delved into the world of games.

After being at that channel for some time, there were auditions for this new gaming TV show called Gameface on Bravo. I auditioned and got the job.

For the radio side, I used to do hospital radio, and then when I landed my job at Radio 1, I got the opportunity to do a lot more – even dipping over Xmas for some of their main hosts, which is definitely a career highlight.

The first-ever live show I hosted was for Mortal Kombat – I was semi-terrified but it ended up being great fun. And from there I always pushed myself to learn more about live presenting.

The difficulty ranges from easy live streams to live TV-grade productions with in-ears and counts and moving rundowns, which is something that’s tricky to learn but you just make yourself do it.

Push through the fear and next time it'll be so much easier.

I had no idea what I wanted to do. I studied photography as a degree and always imagined I would end up being a very poor artist.

I liked the idea of presenting, but when I got into it there was no YouTube path, so unless you knew someone who knew someone, you never heard about auditions or how to get a foot in the door. My mum ran phlebotomy clinics so opportunities never really came about.

Actually, the jobs that got me into the profession were all sliding doors moments. I often wonder if different decisions were made on those particular days what I'd be doing today.

It's so much easier now as you can reach out to anyone and find out a wealth of information, from jobs. to how to host. to how to get yourself noticed. So much of my career was total blind guesswork. I made some heinous errors in judgement over the years.

Photography – not super useful right now. But actually, the process of art photography from concept and problem solving to dealing with critiques is actually very similar to the TV development process. Which is probably why I can't switch off coming up with ideas, much to the annoyance I'm sure of anyone I've ever met.

I think whilst you might not need a dedicated degree (depending on where you aim for of course), life has some incredible lessons to show you, and nothing is ever useful in a vacuum. Skills blur and cross over, and honestly some of my best ideas come from doing something totally different and suddenly your brain puts two unrelated things together.

Pretty much all you need to do to do the thing you want to do – is just to do it. (This is a terrible sentence) but you learn from doing.

We need more women; we need more voices and perspectives from all kinds of places to make gaming the best it can be, with the most engaging stories and incredible worlds.

So if you want to be a presenter – host stuff, do it for free/in your bedroom – practice and get your confidence, and in putting content out there as your training, you’ll find other people who like you and what you’re saying, and that will lead to work, or at least a tribe of people who you can do something amazing with.

When you finish a really complicated live stream and you spend the next half hour riding some pretty fun adrenaline. Best bit though is when I know something I have done has made someone's life better. Even by a small percentage.

I'm pretty honest about my life's struggles and have made content around it, so meeting people who have found it comforting or useful is the best 'thank you' I ever get. This job has given me that platform to make more of a difference.

If I have to keep being asked 'so, do you play games then?' for another 10 years I might punch something. A lot of the time this is after I have told them my job.

I have spent more time than I care to admit talking with channels and production companies, trying to explain to them the importance of games and why they should be making content, to be met with tumbleweeds. This is still the case of all the big channels.

It's very frustrating when you know how popular gaming is and just how much content is made and consumed daily – why am I still arguing with people about this?!

While I feel that it was important to try and push games more into the mainstream as part of my career goal, part of me wishes I had spent that energy in just making more content I love.

I wouldn't take that time back, as I think I have affected some change – I guess just not as much as I would have liked to – it's just a bit tiring waving a flag all the time. But on the plus side, my arms are dead hench now.

The realisation that people that play games want stories told from different perspectives – we will always want that. And for people (not just in games) to accept that perhaps there is gendered and racial bias in decision making processes, and do their best to try and address that. No one thinks they have it, but we all do.

We have been taught it from a very early age, and that kind of brainwashing is hard to undo. But at least accepting that it is there is a start. Once you notice the problem and accept it's there, you can attempt to counteract it.

That and just making a concerted effort to bring diversity into their companies. If you sit in your office and all you see is a sea of white dudes in plaid shirts, maybe you need to think about implementing that one a bit faster.

Just do it. We need more women; we need more voices and perspectives from all kinds of places to make gaming the best it can be, with the most engaging stories and incredible worlds.

If you love games, don't think twice about coming to join us. The community is very welcoming and just know that you are wanted. So, go do it! Right now!

PocketGamer.biz has been releasing a new profile every day this week to celebrate International Women's Day 2020. You can view them all here.