"One thing I really liked when I got away from triple-A development was that the teams and development times got a lot smaller." 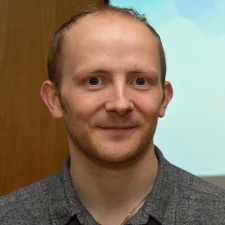 This week, we spoke to Ant Workshop managing director and game developer Tony Gowland on founding the studio, alongside the launch of Dead End Job on Apple Arcade and Nintendo Switch.

Tony Gowland: I started Ant Workshop in 2015 after spending fifteen years working for a range of other games companies (some you probably haven't heard of, others like Rockstar you might have).

I really just wanted to branch out and get the chance to work on a few of my own ideas and by that point, I figured I'd built up a bit of experience and network of contacts that would help me get started.

There's no typical day for me really (especially not at the moment!) and what work I do has changed as our team has started growing. As we work on a mix of our own projects and helping other indies to bring their games to console, we usually have two or three things on the go at once.

So, a day will be a combination of doing some development work myself (because I love to still get my hands dirty!), feeding back on other peoples' work and checking out builds, and then some really boring stuff like accounting or sorting out some other issue that's slowing folks down. Oh, and then posting some stupid stuff on Twitter - that's vital.

I think the biggest challenge was in getting cash flow sorted out in the early years before we'd established a reputation enough to get work for hire jobs, and when we hadn't got enough releases to form a good long tail of revenue.

For me personally it's having a bit of financial stability so that I know we can bring people into the team and there's a steady future there. Everything else we do is in aid of that goal, and it's why we mix work for hire with developing our own IP.

All games markets are pretty competitive right now, and I don't see that changing any time soon. There's a lot of marketing money floating around and that can be tough to compete against - especially for teams that haven't had a big hit or built a big following yet.

Could you tell us about Dead End Job?

Dead End Job is a mashup of a bunch of things that I love. It's a combination of Ghostbusters, a twin-stick shooter, and a roguelike, all wrapped up in a 90's cartoon art style and presentation.

One thing I really liked when I got away from triple-A development was that the teams and development times got a lot smaller.

You play a paranormal pest controller who works for a low budget company run by a really grumpy boss. And to make matters worse your partner has recently died and you have to stop her from spending eternity as a ghost. It's really just a big daft shooter that still puts a grin on my face whenever I play it.

Right now, we've started work on a new game idea but it's early doors so I can't really say too much about it. The few people we've shown it to have made very good noises though, so I'm hoping people like it when we start shouting about it (which will be just after the summer, I expect).

Honestly, I have no idea! One thing I really liked when I got away from triple-A development was that the teams and development times got a lot smaller. I really love the thrill of shipping something and the reaction of players, and so spending a huge budget making the same game for like five years with a gigantic team doesn't hold much attraction to me, I must admit.

When I feel like I've made it myself I’ll let you know. One thing I do say to students and folks who ask is that everyone has a different journey and they're doing it at different times - any advice I learned when I was starting out as an indie is five years old and a totally different marketplace to what teams are looking at now.

I think my most practical advice is to focus on sustainability and do what you can to get some revenue coming into the company. It's less glamorous but it'll mean you get to continue living the indie dream for longer.