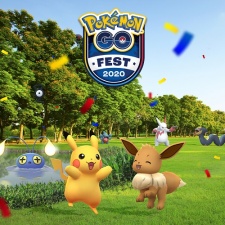 In this entry of our Live and Kicking series, we spoke with Niantic senior game designer Matt Ein regarding the four-year anniversary of Pokémon GO and how the company looks to support the game for years to come.

Note: This interview was conducted prior to Pokémon GO Fest 2020, which took place on July 25th and 26th.

PocketGamer.biz: With Pokémon GO now more than four-years old, how do you reflect on its performance as a series - from launch to the title it is now?

Matt Ein: First, I'd really like to note that we truly have an incredible community of Trainers playing Pokémon GO. We could not be more excited by the response fans have had around Pokemon GO Fest on July 25th to 26th with more than one million people from 110 countries as of last week.

We've added a ton of new features that give people variety and choice for how they want to carve out their experience together with friends; the game is not exclusive to PVP or Raids Battles and you can have just as much fun exploring and discovering Pokémon, making friends and trading with others, and bonding with your buddy Pokémon.

In the last part of the year, we've been working really hard to ensure the game can be played from wherever Trainers are safe and have received a really great reception globally.

How big is the team currently handling live ops at Niantic?

We don't have exact numbers to share but the Niantic Pokémon GO development team is really almost entirely centred around live ops, developing new features, and keeping our current activities fun and engaging month to month.

Not to mention our marketing team has been critical in creating unique stories, events and other in-game activities that are some of the most beloved in the game today. We wouldn't have Community Days if it wasn't for them!

Customer support is very important to us. Our operations team is on the frontlines and interacting with our players on a daily basis. They have a fresh perspective on player insights and up-to-date information on what's going on in the community. I work with them closely to bring those changes back into our game and to prepare our support team for any upcoming feature launches or gameplay changes.

How does the team know when it’s the right time to introduce new content, like the next- generation of Pokémon?

We’re building on a road map of months and even years down the road. In 2020, in addition to all of the changes we've made during a challenging time around the world, we've also integrated new AR features and technologies like Reality Blending into the game as well as rolled out the GO Battle League.

Our main goal is to make sure each update we put in the game every month or so includes ways to balance and keep the game fresh and new, sometimes through larger features and others changes to the meta which honestly excite our fans just as much in some cases.

After Pokémon GO's downloads and revenue began to slow down in the second year, what did the company do to help it to return to the near-heights of the first in the following years?

The first six months of Pokémon GO were really about updating and making sure the game was running smoothly for players around the world. I don't think anyone at Niantic was expecting a launch like that and anytime you have hundreds of millions of people doing anything, new issues are inevitably going to come up and need to be resolved.

Following that initial launch phase, we were able to move forward with planning and building out new features, introducing more Pokémon to the game and just really hitting our stride from a live operations standpoint. We're really happy with the rate at which we've released new features and content and feel like Pokemon GO is at its best place yet with much more in store for the years ahead.

What would you consider Pokémon GO's biggest achievement in its four-year lifespan?

Pokémon GO's biggest achievement is not actually in the application itself, it's the amazing communities and friendships that formed around the game that we treasure the most. Whenever I see my local Pokemon GO group meet up for a legendary raid or Community Day, I feel like I am a part of something truly special.

Whenever I see my local Pokémon GO group meet up for a legendary raid or Community Day, I feel like I am a part of something truly special

Any interesting stories you can share from your time working on the game?

The Meltan tie-in with Ditto on Community Day was one of my favorite events that we set up because it was first teased through Pokémon GO. I still get messages to this day asking if it was a bug or if it was intentional. Overall, I was really happy with how it turned out and hope we can provide other fun surprises for our trainers in the future.

We don't have any data to share but I think a stat that really shows the scale and passion of our audience is Pokémon GO Fest and the near one million people who have already purchased tickets heading into our first major global event.

What lessons have you learned/are you still learning from Pokémon GO? Is there anything about the game that, in hindsight, you'd now handle differently?

Coming from the console game development world, one of the most interesting aspects of real-world games being created at Niantic I learned on my first day is that you really need to keep how the player interacts with the world at the top of your mind through every facet of game design.

Does the team have a plan for year five, six, etcetera. for the game? How long do you expect to support Pokémon Go for?

We're in it for the long haul and can't wait to see what Pokémon GO Fest 2030 will look like!

Finally, how has your experience with Pokémon GO informed Wizards Unite, Catan: World Explorers, and any of the other 10 projects Niantic has stated its working on?

Each game we release at Niantic is an opportunity to build and expand on our premise of real-world games which are really meant to get people outside in the real world, exploring with others and leading active lifestyles.

Ingress was the original foundation for this concept and we've come a very long way in terms of what we feel real-world games are capable of after running Pokémon GO for the last four years. While I don't work directly on these other titles, I'm really looking forward to experiences and communities these titles will create.

We previously wrote about how Pokémon GO is still flying high after four years with revenue continuing to grow and potentially match its debut year.