"For developers it's a no-brainer: the benefit of incremental revenue without driving users out of their games is huge." 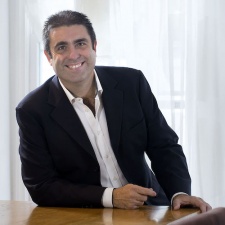 The world of mobile advertising is changing, whether that's due to user attitudes towards the ads that they're seeing, changes to privacy on the app stores, or just the world at large changing.

But AdInMo is already ahead of this change, offering up non-intrusive, dynamic in-game advertising for mobile titles, and the benefits of its approach are being seen by developers across the board.

To find out more about the company and its approach to ads, we spoke to AdInMo CEO Kristan Rivers about what dynamic in-game advertising can do for your game, and the response its ads have seen so far.

PocketGamer.biz: What's your background in advertising and the mobile industry?

Kristan Rivers: I started in the mobile games industry at Digital Bridges (I-play), one of the very first mobile games publishers. This was back in the days of WAP/cHTML and SMS games, on tiny black and white screens.

Then, not dissimilar to in-game advertising now, the challenge was to convince everyone that mobile gaming would become truly mass-market. I recall our first year attending Mobile World Congress (or 3GSM for fellow mobile veterans) the conference organisers didn't know what to do with this weird company offering games on phones.

Our stand was placed between a billing software platform (yawn) and a manufacturer of the big red flashing lights that go on top of cellular antennas. Despite the nascent market, even then, it was clear to me that mobile was the future of digital entertainment.

Since then, I've held several leadership roles in the games & entertainment industry including five years leading Paramount Pictures' digital team in Asia. Of course in that time, the mobile games industry has seen extensive technical evolution and market maturation, and is finally mainstream.

It's my personal belief that no one has ever clicked on a banner ad in a game on purpose!

It's my personal belief that no one has ever clicked on a banner ad in a game on purpose! Games offer unique experiences and as an industry we have to be able to do better than copying 30 second TV commercials.

At Paramount, as IP owners, we hated how the available ad units were completely irrelevant to the game experience. I then started looking at the F2P model more with Flaregames and Eden Games.

Most ads in mobile games are a horrible experience for everyone, especially game developers. To monetize your game you have to interrupt the player's experience with an ad they didn't want, and the best case scenario for monetization is they click on it anyway and leave your game, probably to download another game.

Everyone, from advertisers to developers to gamers themselves, has grown tired of ads that disrupt gameplay and are highly ignorable. It's not a sustainable business model and AdInMo was founded to offer developers a new way of monetizing their games without interrupting gameplay or frustrating gamers.

How has the company grown since it was founded?

We've grown from two co-founders with an idea to a VC backed company and an amazing team developing our adtech platform.

AdInMo was initially based in my hometown of Austin, Texas, (very convenient for SXSW), but relocating to the UK and establishing our Edinburgh HQ ensures we are close to the game development and data science talent we require.

The whole team is committed to creating a better way to connect advertisers to gamers, and we are growing rapidly with several positions open here in beautiful Edinburgh.

How has in-game advertising changed since AdInMo began?

Just as with the early days of mobile gaming, when we started AdInMo there was a requirement to educate the market about the reach and impact of gaming as a media channel.

But thanks to the rapid growth of esports and the ubiquity of games such as Fortnite and League of Legends, the spotlight of the brand advertising world is now shining directly on in-game advertising.

What are the key benefits to using dynamic in-game brand advertising for developers?

Dynamic in-game advertising creates better experiences for everyone. 100% of gameplay can be monetized, driving incremental ARPDAU without the game being interrupted. There's no clickthrough, so ads don't force gamers to leave the game experience. This reduces churn and improves player retention.

Developers and publishers integrating our SDK in their games on average see increases of 15% to 20% to their ARPDAU.

What has the response been to these kinds of ads, both from a developer and a brand perspective?

When I started AdInMo, I thought the SDK would only be integrated into racing and real-world games, but now we serve ads across genres as wide ranging from hyper-casual puzzle games to fashion games to fantasy games. Some of our developer partners are currently testing an interesting solution for pixel art games.

For developers it's a no-brainer: the benefit of incremental revenue without driving users out of their games is huge.

For advertisers it's about helping them leverage consumer trends. Although the illusive Gen-Z may be cutting cords, using ad blockers and subscribing to ad-free movie channels, they are also spending more time playing mobile games than ever before. Dynamic in-game advertising is ideal for building brands and engaging hard to reach audiences, providing real-time viewability and brand interaction metrics.

Most importantly, gamers like our ads too. AdInMo's own research shows that 75% of gamers prefer immersive in-game ads over banner or interstitial ads.

What do you think is the most important thing developers should think about when implementing their monetisation to ensure success?

For game developers, free-to-play ads are a balancing act between monetization and churn. Move the lever too far towards one metric and the other will suffer.

With dynamic in-game advertising, the developer can focus on the creative - quality of ad placement and creating credible in-game experiences.

What advice do you have for developers looking to implement dynamic in-game advertising to their games?

While dynamic in-game advertising can be successfully integrated into games at every stage of their lifecycle, the best in-game implementations are integrated from the beginning of the game design process.

Developers need to think about ensuring placements will generate valid impressions at runtime, using tools to help expedite the development and integration process.

How do you think mobile advertising is going to change and evolve over the next 12 months?

But we're already starting to see developers completely replace interstitial video ad monetization with dynamic in-game ads and this trend will only continue as more brands seek to leverage the channel.

The Covid-19 pandemic has accelerated the shift towards mobile. Brands must innovate to engage their customers and dynamic in-game advertising will help them reach the mass-market.