"If we had finished one year later, E3 would have been cancelled and EarthNight would not have reached even a fraction of its current audience" 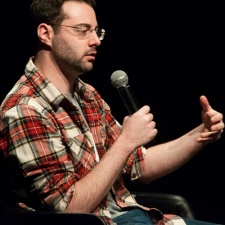 This week, we spoke to Cleaversoft founder and lead developer Rich Siegel on bringing EarthNight to Apple Arcade.

Rich Siegel: When the App Store launched in the summer of 2008, a friend and I started working on our first app in our spare time. The iPhone inspired me to start making games, and after making a few apps/menu-based games, I decided to try to make a more fully-featured video game. That game became EarthNight.

I believe the best path generally for an indie is to launch on console first, establish their game as high quality, and then come to mobile after building some zeitgeist

I wear many hats. These days I divide my time between working directly on EarthNight, managing the rest of the team, doing more mundane business things, and sneaking some work in on for our new secret project.

A lot of the time what I do on a specific day is driven by outside forces. This week, we're rushing to ship some hotfixes to the Arcade 2.0 update, sending out final builds for PlayStation 4 and Nintendo Switch for our upcoming console launch in Asia, as well as finishing up the design for our first physical EarthNight products.

My biggest challenge as an indie and I think in my life so far has been shipping EarthNight. It started as a side project and took on a life of its own. It was my first project of this scope and I certainly bit off more than I could chew.

As the years went by, I felt mounting pressure to not only finish the game but for it to be great. Getting a 'finished' game ready to launch on a major platform is an incredible challenge for a small team. I am super proud of us for coming out on the other side.

During development, I hoped I would feel successful as long as we finished the game and I was personally satisfied with it, regardless of financial success or number of players. There is something magical about bringing joy to people by creating something and putting it out into the world.

I would have been emotionally bruised if we received terrible reviews and no one played, yet thankfully with the help of Apple, Sony, and Nintendo we've reached over 180,000 units across all platforms and reviews have been pretty positive. We even got one 100 Metacritic score approved review of our PS4 version - that made my day for sure.

Experiencing the journey of bringing a game of this scale from a few sketches to being released on Apple Arcade and other platforms with such an amazing team were the best part. I believe we will get to take another journey, which is the ultimate success.

I think it's really hard to break through and that's why Apple Arcade was such a unique opportunity, but with a little luck and a very high-quality polished product, the sky is the limit.

I believe the best path generally for an indie is to launch on console first, establish their game as high quality, and then come to mobile after building some zeitgeist. However, if developers can find an opportunity to launch with a platform like Apple Arcade, they should jump at it.

Could you tell us about EarthNight and why the game felt right for mobile?

EarthNight is an illustrated epic 2D auto-runner platformer about the dragon apocalypse. Dragons have taken over the Earth and the final remaining humans are in space as refugees.

Our heroes Stanley and Sydney decide they've had enough and they're going to skydive down to the planet and take out as many dragons as they can. With a lot of skill and dedication, players can reach Earth's surface to face the final EarthNight dragon and save the world.

EarthNight was originally conceived as an auto-runner game meant to elevate the genre to new heights. I really loved the 2D auto-runners at the time like Canabalt and Jetpack Joyride, but they didn't feel like fully fleshed out games to me. I wanted to bring the kind of depth players would expect from a console platformer to an auto-runner.

If we had finished one year later, E3 would have been cancelled and EarthNight would not have reached even a fraction of its current audience

We showed EarthNight at E3 2019 with Indiecade and managed to talk to a lot of industry folk and game developers about how we should proceed with the launch. We had just finished squashing all the bugs for the PS4 version and Switch was not far behind. At the time there was a lot going on in the industry. Epic, Xbox, Google, and Apple were all looking for content for their services, and we were already set to release with Sony and Nintendo.

After discussions with all parties, we decided to go with Apple. The company's intent was pure and its people were excited about EarthNight. They really wanted to bring people high-quality content without the predatory practices that some have adopted in the mobile space. Their offer was very generous and still allowed us to be on the other platforms. We feel incredibly blessed and lucky to be a part of the launch squad of Apple Arcade.

When I saw EarthNight on the screen at an iPhone reveal event my heart skipped a beat. I think Apple, Nintendo, and Tesla are the 3 companies I most admire in the world. It's still mind-blowing to me that EarthNight launched with Apple Arcade and can be played on a Nintendo console. If I could tell my five-year-old self that 25 years later I'd be signing deals with Phil Shiller and creating a Nintendo game, he wouldn't believe me.

What should we expect in EarthNIght 2.0?

The hallmark feature is over 40 unlockable new outfits for Stanley and Sydney. They span all 400 plus frames of animation for each character. We've also added a dark mode which alters the ship interior and exterior, a new chipocrite track as an alternate song for World One, and improved performance, especially across lower-end devices.

We're doing alright. I've got a two-year-old and a baby at home and haven't been to the office since the middle of March. I'm just thankful that we can still work and that the timing wasn't detrimental to our game's release. If we had finished one year later, E3 would have been cancelled and EarthNight would not have reached even a fraction of its current audience.

We'll be supporting EarthNight through 2022 and working on our new secret project internally called "Project Boomerang".

A top-down action-adventure RPG masterpiece for the modern age with a focus on fluid combat, exploration, story, and puzzles, inspired by older Zelda games.

After spending seven years making EarthNight, despite friendly advice to work on a shorter project, I'm only interested in making something truly epic, which takes a long time.

I started down the path of becoming an indie developer in 2008 and it took me 12 years to 'make it'. There were a lot of times along the way where I thought I never would. It's not an easy road to go down, so don't take it unless you are really dedicated to the art of game making.

I think the best advice I have is to hone your craft and keep meeting and talking to people in the industry. You have to find your band members and also be good enough at your instrument when the band is ready to go on tour.