"We got reviews on nearly every major site, print magazines and newspapers" 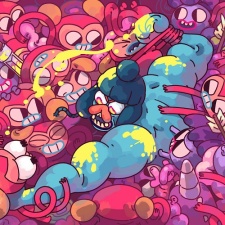 Dan Vader is the game director at Capybara Games and was the lead on Apple Arcade exclusive Grindstone.

Next up on our schedule of developers, we spoke to Capybara Games game director Dan Vader who found huge success with Apple Arcade launch title Grindstone.

PocketGamer.biz: Can you start off by telling us about Grindstone and why it felt right for Apple Arcade?

Dan Vader: At its simplest, Grindstone is a colour-matching puzzle game but we think it looks and plays a lot different than your average mobile puzzle game. Instead of abstract shapes, or static objects, the puzzle pieces are living, snarling little monsters and instead of the tip of your finger acting as the main character, we have this hulking barbarian named Jorj. You need to path through like-coloured monsters to create chains which Jorj then slaughters his way through, ending up somewhere else in the level.

Grindstone has a lot of strategies and tactical decision-making folded into the design as well. There's a ton of gear, and bosses and mechanical twists that actually nudge it closer and closer to a turn-based combat game than a colour-popping puzzler.

I think what made it work on Apple Arcade are those elements. It also launched with a lot of great family titles, a bunch of shorter narrative games, and some interesting art pieces. Grindstone provided that other side of the equation: something approachable that then reveals depths and gets its hooks into you - and because it's Apple Arcade it isn't asking you to open your wallet every time.

How did the partnership come about between the studio and Apple? When did the first conversation take place?

The game had a long, winding development path. We made an early prototype of the game sometime after Superbrothers: Sword & Sworcery EP came out in 2011 and since we had such a good relationship with Apple (because of that game), we showed them the demo of Grindstone and they really dug it. At that time though, we kept putting the game on the back burner to work on other things that popped up.

Then months later (or years even), we'd pick Grindstone back up and tinker with it a bit more. The whole time our friends at Apple were quietly going: "Hey what about that Grindstone game?". Apple was well were aware of Grindstone years before there was ever an Apple Arcade, so I think that helped put us in the running. Luckily, we had also finally carved out the time to finish Grindstone so the stars kind of aligned perfectly.

What kind of support did Apple offer you through the partnership?

Apple has been a great partner throughout the launch and support of Grindstone, both in helping the game to find an audience, as well as more internal stuff that popped up along the way. The company has always been supportive and encouraging of the studio.

That didn't change with Grindstone, which meant they respected us as developers and created an environment in which we could make Grindstone on our terms.

We're really proud of Grindstone and the amount of hard work we put into it, with Apple Arcade helping it to find an audience overall. In fact, for many of us, it was the first game of our careers that our friends and family actually played, and I think that's because of Apple’s devices and reach. Personally, I've invested 20 hours into What the Golf? from Triband, so that feels like success to me.

How did being part of Apple Arcade affect the success of Grindstone?

It's hard to say how Grindstone would have fared if we had released in a different capacity, such as opting for premium on the App Store or as an ad-supported game perhaps. My gut says we would have faced an uphill battle to grab people's attention in that space, but we'll never know.

I think even more than being a part of Apple Arcade in general, it was being a part of the highly publicised launch of the service that I think brought Grindstone the kind of attention we felt the game deserved. We got reviews on nearly every major site, print magazines and newspapers. How common is that for a mobile title? I think there was a lot of industry attention on Apple Arcade's ribbon-cutting and I definitely think we had a standout title behind that ribbon.

We got reviews on nearly every major site, print magazines and newspapers. How common is that for a mobile title?

What were the main challenges (if any) you encountered developing the game for Apple Arcade?

We were in the home stretch of development on Grindstone when the Apple Arcade opportunity came up, so I can't say there were many challenges beyond finishing in time to make the launch of the service.

Why is now the right time to port Grindstone to Nintendo Switch? Has your exclusivity contract with Apple now ended?

The reason we're releasing Grindstone on the Nintendo Switch now is simply that we're ready to - it doesn't have anything to do with exclusivity. After Grindstone launched on Apple Arcade we decided to focus the team on updates and growing Grindstone with further content. Weirdly, we had never attempted that kinda now-ubiquitous development model before and we wanted to gain that experience. That became our sole focus as a team--cutting our teeth in live-service development.

That said, we always knew we wanted to create a Nintendo Switch version and have always had it in the back of our minds. So, throughout 2020 we've been able to grow the Grindstone experience and awareness before bringing it to another platform.

It's the right time for Grindstone on Switch because of how we've been able to expand the game and, frankly, we've finally had the time this year to build this particular version of the game right.

From your experience, would you ever look to launch another title on Apple Arcade, whether that be exclusive or not?

Absolutely, if the right game came along. Apple Arcade represents an increased chance at reaching a built-in audience and in a marketplace as competitive as video games, any kind of chance at grabbing eyeballs and thumbs is worth considering.

It's a move that keeps the service in the larger marketplace conversations and perhaps changes the perception of what kind of experiences to expect on the service. I'm also wondering if Apple will start to nudge the service, ever so slightly, towards new types of games.

I don't have a crystal ball and in terms of how fast cultural trends seem to be moving, five years seems like the right span of time where we could see not one but several industry pivots or leaps.

I would say that the Covid-19 pandemic has shown that people, out of necessity, are investing in their home lives and anything that enriches their family#s time spent in some state of lockdown. So, therefore, subscription services and similar offerings with a buffet of options aimed at every member of the family seem like a good bet to materialise more.

We previously spoke to Dan about the unlikely success of Grindstone and the forming of the Canadian-studio.