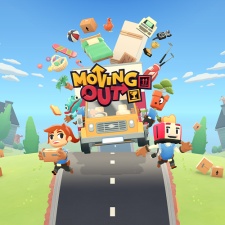 Ashley Ringrose is the founder of the Australian-based SMG Studio. Games released from the company include Death Squared and Fast and Furious: Takedown.

This week, we spoke to SMG Studio founder Ashley Ringrose regarding the development of Moving Out and how the game had to take on both Animal Crossing: New Horizons and a global pandemic to get out the door.

PocketGamer.biz: Can you start off by telling us about Moving Out?

Ashley Ringrose: Well, the sales pitch for Moving Out is a ridiculous physics-based moving simulator that brings new meaning to the term couch co-op and I like to refer to it as Overcooked, but you’re moving furniture with physics as that is the best reference point for people to grasp.

We came on board around six months into development and then we spent another 18 to 20 months after that.

We’re available across Xbox One, PlayStation 4, PC and Nintendo Switch, with the latter being our most popular. The game can be played solo but best enjoyed with two to four players in co-op.

It was Jan Rigerl from DevM Games who had the initial idea and prototype which came about after helping a friend move apartments. Initially, Jan had drawn up plans for the best way to move the couch before he realised that there was a game in this and started prototyping.

I believe the very first iteration was very simulation-like, slower and points-based. However, through iteration and working with us at SMG, we realised the most fun in this game is to embrace the chaos, lose points and just let people move any way they want.

We came on board around six months into development and then we spent another 18 to 20 months after that. Initially, there was some pitching and working out what the game was, so it didn’t really ramp up properly until six months into production for us.

Knowing where to put energy into. Luckily with T17 on board, it gave us a sounding board for ideas and where to focus. We could have easily added a bunch of new game modes and ideas that would have appealed to five per cent of people but then it would have impacted the overall delivery of the game.

I know a lot of friends that we showed the game to early and then again at the end of development thought we made a lot of right decisions with where it could have gone. It's very easy to think more is better, yet that isn't always the case.

I feel I've got a good knack for “finding the fun” in a prototype. So when I saw the original prototype, I could see the potential. Once we showed the game at PAX, all my fears disappeared and I was confident the game would work.

Also, once we saw the art from Jon (art lead) in the engine, it really did make the game come to life. Putting a "boss hat" on for a second and from a business perspective, I was happy once I knew the game would do well enough to sustain our Melbourne studio and give us the freedom to try new things in the future.

As a studio, you’ve got to be pretty strategic in your use of time and team as a few false moves and it can be bad. So we now have a good buffer to let us continue without any pressure.

Why did you feel this was the right time to launch on Nintendo Switch?

Well, we wanted to launch in March but that island of animals (Animal Crossing) blocked our launch window. In the end, I’m glad we launched when we did as it was much less packed and has continued to be so since August. Every week there are 10 new games which could easily top the charts. We do think the pandemic and subsequent lockdown helped, as families were bored and locked inside.

Well, we wanted to launch in March but that island of animals (Animal Crossing) blocked our launch window.

Moving Out's main audience has to be parents who have kids who play games as well as players that enjoy a good couch co-op gaming experience. Whether that’s couples or just friends that play games together.

Our team all started working from home from mid-March. We launched at the end of April when there was strict lockdown in Australia (and around the world), so we haven’t been able to celebrate with a party yet. From expecting this whole work from home situation to last approximately 12 to 16 weeks has continued since, now reaching week 33.

I initially thought there was going to be no major impact but feedback loops and time are both becoming an issue. Luckily, we're in a position where we are able to push these things back and adjust. It’s frustrating as we want to keep at the same productive rate we were previously at and I want to hit strategically important deadlines but at the end of the day, we need to be realistic.

For some, working from home is great. For others, it’s stressful so there needs to be a balance with how it’s handled. I think the Melbourne team - who have been in strict lockdown for the longest - are being asked to be very resilient and have coped well.

Very happy both commercially and creatively. Also, we're proud that we were able to deliver the game ahead of the development schedule. Though, we did push back deadlines behind the scenes as we only announced a date once we were 100 per cent certain we could deliver. Even then, we came in before that. So that’s a win unto itself.

As Moving Out is available across so many platforms, this does make us a little slower to add updates. We’d love to try new things first on Steam as it’s the quickest to roll out but it would make our biggest audience on Switch unhappy. We initially updated the game with a new character, fixes and platinum times. We're still very busy but have no specific announcements yet.

We can't reveal any hard data other than to say the game has performed well and everyone is happy.

SMG usually has a few projects on at once. We’re still working on RISK which is in its fourth year now and launched on Steam in February earlier this. Additionally, we have No Way Home on Apple Arcade which we’re still expanding on, alongside some other projects in the works too now that the dust as settled on Moving Out.

Indie Spotlight: SMG Studio on going from Flash to Fast and Furious

Coming on leaps and bounds: the making of Bean Dreams