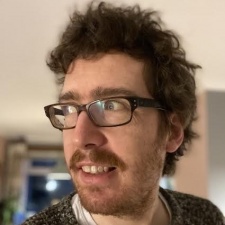 Today, we're speaking to Joe Bain from Hairy Heart Games, who pitched Rallyallyally at The Big Indie Pitch (Mobile Edition) at Pocket Gamer Connects Digital #4 in November and walked away as the champion.

Joe Bain: Hairy Heart Games is a brand new studio, I'm based in Glasgow but we all work remotely. The team is me, Joe Bain, as programmer, 3D artist Frankie Hobbins, and sound designer Damion Sheppard. We're just a loose collection of freelancers really, masquerading as a company! So far the studio is focused on racing games, we have another title in development, an arcade racer called Death Pedal. I want the company to make fun and light-hearted games that try to push a bit at the boundaries while respecting the genre we work in.

Tell us about Rallyallyally that you pitched at the competition?

Rallyallyally is an online multiplayer knockout-style racing game. 8 players at a time compete in a wild cross-country race and the slowest drivers get knocked out until only one is left. It's either Fall Guys on wheels or a modern-day Micro Machines, depending on how old you are.

What do you think are the most unique and interesting aspects of Rallyallyally that gamers may never have seen before?

The most unique part is how the track works. Each round one player gets to roll out a big roll of tarmac; they push it with their car and basically choose where the road goes. All the other players have to chase them and try to catch up. It means every game is a bit different and players can pick any route they like and have a lot of opportunities to add strategy and tactics to the game.

Rallyallyally is a stylised casual/hypercasual racing game that encourages competition and a party-like atmosphere within its gameplay. What made you choose this genre, and what do you think you bring to it that may not have been seen before?

I really like games which are fun to get into, easy to learn, and I personally like racing games. I think there are too many games out now which involve killing each other so I prefer to stay away from shooters or brawlers too. Hopefully, we can bring a bit of fun and innovation to racing games, and I want people to be able to play it and not get too stressed out about winning.

How did you come to choose the platforms that you would develop Rallyallyally for?

I always had the idea that it should be a game for younger kids and I know they all have phones and tablets these days so it seemed like a natural fit. I could see there being a console version in the future too, I love the Switch, but one thing at a time!

I make most of my income as a freelancer on other people's games, and so does the rest of the team. The first year or two was a bit tough but actually, right now there seem to be loads of small studios doing interesting little projects who need help. They all kind of share freelancers between them and maybe have a small number of in-house staff; it's a small industry and I always bump into the same people at different jobs. Getting funding for a game is a different story though! We got a small grant from the UKGF which has really helped and hopefully winning the Big Indie Pitch will get us on the radar of some publishers too!

I think jumping straight into your own game or studio out of Uni is really hard, although some people manage it. I always think there's a lot to learn working for other people for a bit, either freelancing or full-time. Getting your first foot on the ladder is always tough, I always recommend young developers should get involved in local groups and seek out smaller teams to work for. If a company doesn't have an HR department they probably have way fewer people competing for the job too.

It was really exciting! I have done some publisher pitching before, but the speedy nature of this, and the fact it was a competition, making it much more intense. I feel it really made me hone my pitch and make it as focused and engaging as it could be.

I got some great feedback and some good contacts who may help with the future plans for Rallyallyally. I hope I can take the success and put that confidence into future pitches too.

I want to see the game released next year and hope it finds a good audience! I'd love to find a publisher to work with on it, and hopefully, the right one is just around the corner. After this I want to return to Death Pedal, another racing game I'm developing, which is currently on the back-burner and after that who knows.