Sakura Games' Jana and Sham Al Bdour on challenges in the Middle East, and future-proofing the industry for female developers

The sisters discuss success, challenges and finding your passion in unlikely scenarios 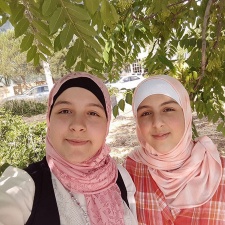 March 8th, 2021 is International Women’s Day, an annual celebration of achievements for women all over the world.

In a world that feels so equal, we often hear echoes of ‘women can do everything that men do, why do we need this day?’. While that does ring true thanks to the tireless efforts of those that paved the way, many industries are still not the level playing field that they can and should be, and that includes the global games industry.

With that in mind, our Jobs in Games section this week is dedicated to showcasing incredible women working in the games industry, from all backgrounds and disciplines. We’ll be sharing insight, stories and advice from some of the industry’s most talented women.

Sisters Jana and Sham AlBdour are the co-founders of Sakura Games, an independent studio based in Jordan. Jana works primarily as a 3D gameplay programmer at Sakura Games, while Sham is a 3D game artist and designer. The pair are best known for their 'eduternaiment' (entertainment and educational) mobile games; notably Car Girl Garage, a mobile game that teaches real-life car DIY skills. They’ve also developed Crimson, a game that teaches children letters, numbers and shapes in both English and Arabic.

Despite being one of the most-spoken languages in the world, Arabic localisation in games is often incorrect or simply non-existent. Sakura aims to serve society via making edutainment titles that are both informative, fun, and most importantly, accessible to a wide scope of people.

The pair have been working in the education space since they were young and were supported by their father. Jana and Sham began their journey as young journalists in the education field at ages nine and 13, respectively. Following this, they moved into voice-over work with companies such as DW Documentary, UNICEF and JeemTV to create and localise educational content for children.

They then began learning different programming languages, including HTML, Java and CSS, before moving into game development. Sakura Games has found success in games competitions around the world - including Pocket Gamer's Big Indie Pitch - but their journey as Arab women in a male-dominated industry has not been entirely smooth.

“The main challenges for us were the lack of investment and funding, lack of companies in our area where we can practise or get an internship, a lack of women working in games which also leads to lack of role models, and the lack of mentorship opportunities in the region,” they said.

“There are also the disappointments you face in the beginning because you were expecting faster results, and how some companies claim to support talent when they do not. One problem people in the Middle East face is that there's no content in Arabic, especially back when we started in 2017. This was not a problem for us but it's for others.

“Moreover, the competition is big. There are only two of us competing against huge companies that make amazing games with hundreds of employees and decades of experience.”

Another struggle the sisters faced is the stereotypical opinion that young women don’t belong in game development. While this is a struggle that women face on a global scale, it is particularly prevalent in the Middle East, where game development is still a rising industry and flagship studios are few and far between.

We believe that women all around the world can be represented better by being given the opportunity to lead.

“We have heard that game development is not fit for us, it's not our place, and we are just doing it for equality but this isn't true. We like games too, and female gamers are rocking it. There are also people who think that women only work in the creative side and can never work in the technical one,” the pair added.

“We believe that women all around the world can be represented better by being given the opportunity to lead. Also, by creating a community that truly supports and trains women to enable them to be leaders.”

“When we do that, we will have more role models and capable female game developers.”

With this in mind, Jana and Sham also noted that there are things they wish they had known before entering the games industry. However, the sisters are now equipped with knowledge that they can pass on to Arabic women looking to get into games the way they have, and sage advice about trying new things, even if they seem daunting.

“We wish we knew that the importance of story, game design, UX design, and polishing is just as important as programming and game art,” they said.

“Also, creating a game quickly is not the right thing to do but creating it efficiently and neatly. We used to be proud of our ability to make quick games, even though our games could've been much better if we gave it time.”

“Try everything. Once upon a time, Sham had to dissect a rabbit with her classmates for a biology class and was very much against it because she didn't want to kill an innocent rabbit, but our dad told her that just like she didn't know her passion in life until she tried, some of her classmates might realise that they have an interest in medicine from this experiment, and he was right.”

Sakura Games already has a handful of impressive mobile titles in its portfolio; games that are not only smashing stereotypes by showing that young Arabic women can excel in game development, but with the contents of the games too. Cars are also traditionally a ‘man’s hobby’ and Car Girl Garage’s female protagonist not only teaches real-world skills, but that women can share in these interests.

The studio hopes to continue their impressive work in building boundary-breaking games with Bio Adventure, a project consisting of games, tools, and simulation apps to cover biology concepts.

“It's an idea of successfully integrating gaming principles and scientific information to make learning more fun, providing a challenge and a motive for the students to learn,” they added.

“It's a simulation game about cell mechanisms and biological interactions and a modern concept developed accurately with students' needs in mind. We have developed a big part of this game but still are wanting to improve it.”

Kelly Vero: "Don't step down because you're 40 or 45. Step up and say that crunching is bullsh*t instead"