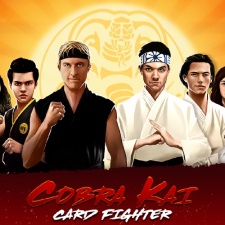 And in the current mobile and handheld games market, that's only the first step to making the title succeed.

This week, we spoke with Boss Team Games executive producer Tim Hesse who discussed the development and launch of Cobra Kai: Card Fighter, a spinoff from the hit Netflix series that was developed by Chilean studio Gamaga.

PocketGamer.biz: Can you start off by telling us about Cobra Kai: Card Fighter?

We’ve taken the characters and narratives from the show and created an accessible yet deep card mechanic, to create a fighting game based on ‘signature’ moves from the series.

We bounced around a few concepts at Boss Team that we felt would fit with the brand and stay true to what fans would want to see.

We worked closely with Sony Pictures and the Cobra Kai showrunners to keep on brand and that team had a lot of input on the end results you see in the game.

Fighting was obviously going to be a big part of this, but it was the team at Gamaga that helped design the card fighting mechanics. It was a very fun collaboration.

How much influence did the game take from the Netflix show?

As huge fans of the series, we wanted to stay true to the show. Boss Team is all about creating gaming experiences that expand on plotlines, characters and dialogue to make you feel like you’re part of the show.

We worked closely with Sony Pictures and the Cobra Kai showrunners to keep on brand and that team had a lot of input on the end results you see in the game.

How long did development take?

We really started up after season two of the series aired and had the full Gamaga team creating content and refining the original design into what you see now.

We’re still working on new content, new characters and will obviously be refining the game based on user feedback for years to come.

Aside from COVID-19, I’d say keeping the game accessible while still maintaining depth and strategy; there is always a risk in going too hardcore, or too casual and we wanted Cobra Kai: Card Fighter to offer a bit of everything to everyone.

The great thing about the game is that the core is the same for everyone, casual players can jump in, play against AI or their friends and so can the hardcore players – it’s up to the individual how deep they want to go.

There’s so much to do in the game from grinding out cards and powering them up, to ranking up via Leagues and Belts or participating in Tournaments. We let players decide how hard they want to play and how they want to progress.

To be honest, the first playable. Seeing the characters on screen, performing the moves I selected against another real player, we knew we had a great formula and we knew that it was fun to play.

Knowing all the other features, moves, and characters we’d be adding kept the whole team excited about where the game was going and where we’d end up.

Why did you feel March 2021 was the right time to launch globally?

At one point there was a real goal to release day and date with season three but we really believe the series and the game will be relevant to Cobra Kai fans for years, so hitting a date was less important than making sure we had a game that people would love to play.

Merging standard card battles with the core elements of the series helped us create something a bit more unique.

There is so much going on in the Cobra Kai universe that we knew there would be overwhelming reaction whenever we launched but coming out with a fun game that captures what the show is about was the most important thing for Boss Team and Gamaga.

With so many card-based titles, how does Cobra Kai: Card Fighter look to stand out from the crowd?

We took a bit from here, a bit from there and put our own vision as to what we wanted a ‘fighting’ IP to be.

The game is easy to get into but also very deep so merging standard card battles with the core elements of the series helped us create something a bit more unique than what’s currently on the market.

What did you learn from the soft launch period?

We did a soft launch and that process helped us refine the gameplay and led to us creating pathways that make it easier for players to jump right into the fights.

The character management ended up being much more streamlined in the final version of the game and we’ll continue to welcome player feedback so we can keep expanding the game in the months and years to come.

Over the long-term, not at all. Initially, like everyone else, we wanted to make sure everyone stayed safe and that we had open lines of communication between the dev team, ourselves and Sony.

Once we got through that initial adjustment period, which probably took a week or two to get settled, it was full steam ahead. Many of us in the games industry were very lucky in the sense that everyone can work from home with little impact on day-to-day operations.

We have a lot in the queue, from Season Passes (dubbed a 'Sensei Pass'), cards, characters, skins, you name it!

One of the exciting things about this game is the connection it has to the series and how we’ll be able to keep adding content and characters and new moves that are taken straight from the show.

We’re already looking at what we can do to incorporate more elements from last season while making plans for what the series showrunners have in store for next season. All of that makes it very exciting to be part of this game.

Our vision for Boss Team Games is to take franchises that fans know and love and turn them into games that let you experience your favourite moments and make new ones all your own.

We’re focusing primarily on games based on IP that have multiple decades of fan cultivation, have little to no representation in the gaming space and would make fun games to play.

We always start out working towards a game design that we think would bring something new to the table and most of all be fun. Then we make sure that we stay faithful to the underlying franchise to get all of the small details in the game that we know players will recognise and love.

We followed this script when we started work on Friday the 13th: The Game, we’re doing it now with Cobra Kai: Card Fighter and you’ll see us doing it with Evil Dead: The Game.

We always pick properties we know and love and all of these games are examples of the philosophy we’re going to employ in all of the games that Boss Team makes.