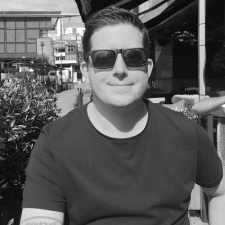 We founded the company a few years ago and for the last three years, I’ve been working full-time, primarily as a game designer but also as a project manager and CEO. It’s been challenging but a lot of fun.

Well, my passion for games started when I was a kid like it did for many others. I was fortunate to have a Dad that dealt with importing electronics from Japan and one day he came home with this thing called a Famicom, and I’ve been hooked on video games ever since.

There’s no better feeling in the world than seeing your finished game out there in the world!

Games as a profession weren't really something I had considered until about 10 years ago.

However, when I found myself working as a store manager in a video store and slowly realised that the rental of DVDs wasn’t something that was going to be around in the future, so I decided to start looking for a new job, but not just any job - a job at Nintendo.

I spent an entire week producing this magazine of sorts, inspired by magazines like Nintendo Power where I reviewed games and conducted an interview with myself, which was the actual job application. I spoke to their marketing manager and he was really impressed over the amount of work I put into this, yet unfortunately, there weren’t any openings for me at the time.

Then I did some thinking and realised that the best way for me to get a job at Nintendo was to go to business school, so I did just that, I studied sales and marketing for two years which helped to get a foot in the door to the industry.

Being a CEO is definitely something I thought about as a child. My Dad had his own business and was his own boss for 35 years, so he’s a huge inspiration for me.

I started my career as a seven-year-old, selling pencils in school, so entrepreneurship was always something that was close to my heart.

I was a store manager for about five years, which landed me a lot of practical job experience and a bunch of courses in leadership and management. But once I decided to move on, I attended a vocational university where I spent two years studying marketing, sales and business. That eventually led to an internship, which led to a job that led to me starting my own business.

So, I have a degree in what I do about half of the time but as a game designer, I’m self-taught. I love this with game development that there are so many ways to enter the industry, all of them are great. You just got to find the way that fits you.

Definitely shipping a game. I never really understood developers that all the time want to make prototype after prototype and just do the fun stuff. There’s no better feeling in the world than seeing your finished game out there in the world!

I drop the kid off at daycare at 06:30, start my workday at 07:00 before going through my emails, social media, various notifications on things like Discord and Slack while grabbing a large cup of coffee. Then I ride my bike to the (basically empty) office and prepare for our daily stand-up at 09:30.

Disadvantages? The absolute horror of knowing this crazy dream can come to an abrupt end any month when we run out of money,

After that, I dig into whatever’s needed right away which could be updating a budget, designing a level, ordering a new laptop, meeting with the accountant etcetera. I have too many things going on!

Then at 16:00, I ride my bike back home and spend time with my son and wife until he’s asleep at around 20:00. Then I normally spend an hour or two doing level and game design or answering an interview (like this one).

Finally, at approximately 23:0, I go to bed, pretty exhausted. I like what I do but it’s hard to run a company when you have a kid. You have to work hard both at home and in the workplace.

Advantages are the absolute freedom to do what you want, make the games you want: go to work when you want, take a day off if you want, having a great team to work with and just seeing your own game in the wild.

Disadvantages? The absolute horror of knowing this crazy dream can come to an abrupt end any month when we run out of money, the stress of feeling you have to work every single day - even on weekends. Knowing that, if everything goes belly up you might be broke and out of a job for a long time!

I think a lot of people believe that you need to a lot of passion for games in order to a run studio, yet that's just not possible for me with a kid at home.

As a result, I never find any time to sit down and play. That said, I still think I do a pretty good job.

The game industry is such a great business and it’s made up of a lot of beautiful and talented people that have come into it from all kinds of backgrounds.

I think you should figure out where you want to be in five years from now and work towards that goal. If that means going to business school for two years, or making a solo game alone at home for two years, then go for it!

Well, it’s hard to say but it has definitely impacted us. Our office is in a shared office space with two other game developers and almost daily you’d run into old buddies, potential business partners and other very cool people.

So, with us working primarily remotely, you’re totally missing out on that aspect. It's also hard as a project manager to coordinate all the team members.

I trust fully heartily in our team but sometimes I sit in front of the computer and find myself not knowing what everyone is working on, something that can be quite stressful. All in all, I think we manage pretty well, though.

Yes, there’s this GDC talk I think where the presenter ends with a slide that says something like: "No one knows anything, we’re all just guessing. Go with your gut and good luck." It sums up not just work but life in general.

Basically, everyone is just trying to figure stuff out. I’m not saying there aren’t extremely skilled people out there (there are) but I was surprised when I found out how much of it all is just taking a guess, making a decision and going with it.