"We don’t serve everyone unless everyone is represented at the design table." 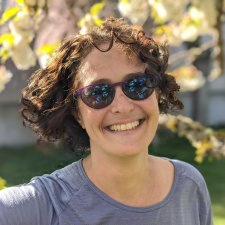 In observance of International Women’s Day 2022, this week we’re highlighting some of the incredible female industry leaders that we are honoured to have speaking at our upcoming Seattle conference. We could not be more excited to have them as part of our star-studded speaker line-up, and we couldn’t wait until May to get to hear from them and to share their brilliant insights with our PocketGamer.biz readers, so, we had a chat with them about business, games and, of course, what it means to be a woman in games. We recently spoke with ggLocators’ Cami Smith, you can read our conversation here.

Nothing - not even a dream job - is worth sacrificing your personal relationships, health, or wellbeing for.

Next up on our Spotlight series is Eve Crevoshay, Executive Director at Take This. Eve Crevoshay joined Take This as Executive Director in 2018. She is a 20-year veteran of the nonprofit sector, with a background that spans education, social services, and the arts, and she is committed to identifying and enabling systemic change. Eve is a member of the advisory boards for GDC (in the advocacy track), the Fair Play Alliance, The Games and Online Harassment Hotline, and The International Game Summit on Mental Health; and is the recipient of the inaugural GamesBeat Up and Comer award (2020).

PocketGamer.Biz: What is the single biggest challenge facing the mobile games industry today?
Eve Crevoshay: A single one?! Actually, I think it’s that the landscape is FTP and that folks are forced to forgo interesting design approaches in favor of monetisation. I think that sucks, and it really limits what’s happening in mobile games.

What’s your favourite ever mobile game?
I’m biased, because my husband’s company made it, but I’ve been playing Triple Town off and on since it came out. I playtested that game while I was nursing my daughter!

What is the most overhyped trend from the last 12 months - and why?
NFTs. I’m sorry, but I just can’t see how they do anything that hasn’t already been done in games in a way that fundamentally changes or adds to either the economics of games (for people who aren’t speculators) or to the game experience itself.

What is the most important piece of advice you have been given?
It was from my mom: expectations get in the way. In other words, don’t come in with expectations, but rather see what unfolds. She said that to me when I was 17, and as I’ve matured and gained more experience, I’ve seen how that plays out with management and leadership skills like listening to understand, and nonviolent communication. I think about it all the time.

Women (mostly white women) are fighting so hard for a seat at the table that they remain convinced that the table has a limited number of seats.

How important is it for women to lift each other up and what does that mean to you?
I see this a lot, both in workplaces and in the nonprofit sector where I’ve worked for my entire career: women (mostly white women) are fighting so hard for a seat at the table that they remain convinced that the table has a limited number of seats. That’s not true! We need lots of women and femme-identifying people, with all sorts of expertise, backgrounds, and goals - just like we need men and non-binary folks with that diversity. We don’t serve everyone unless everyone is represented at the design table, full stop.

On International Women’s Day, what is the most important message you want to send out to young women thinking about their careers?
It’s OK to realise you’re on the wrong path and to course-correct, and it’s OK to leave something you love because you’re not being supported. Nothing - not even a dream job - is worth sacrificing your personal relationships, health, or wellbeing for.

How do we create a safe space for women’s mental health in the games industry?
So, what I find interesting about this question - and, in my line of work, I get it a lot - is that we presume that we need entirely safe spaces. What I actually believe - and this is backed up by plenty of research - is that people need to trust that they will be listened to, believed, and trusted, but that productive work and social environments will also often ask people to be uncomfortable, brave, and a little bit challenged. The hard part is that we do the latter - challenge and discomfort - without the former, which is trust, listening, and respect. That takes new structures, new ways of decision-making, new people in places of power, and new perspectives on what is valuable in making good games.

We don’t serve everyone unless everyone is represented at the design table, full stop.

If you could have dinner with three inspirational women, dead or alive, who would they be and why?
I think I have about 50 answers to this… But my choices right now are my grandmothers and Eleanor Roosevelt. One of my grandmothers died just after I graduated college, and the other just before my daughter was born. I have so many questions for them now that I’m in middle age that I would never have thought to ask them before they passed - and they were both extraordinary women who raised my beloved parents. Eleanor Roosevelt was a visionary woman with a fascinating set of opportunities and barriers, and she helped found the university I attended - Brandeis. I would just be so curious to know what her perspective on the world would be today. (Also, my maternal grandmother ended up riding on the running board of her car during a victory tour through Tarrytown NY when she was 7 and the story has always stuck with me! Apparently Mrs. Roosevelt remembered the incident years later.)

What did you dream of doing when you were a little girl?
I dreamed of changing the world! (well, as a six year old I wanted to be a nurse and a firefighter, and maybe a ballerina, but since middle school anyway) I have always known that social change was what I was going to be a part of - I just never imagined that it would be through Take This, in the game industry. I remember having conversations with my dad in high school about what it meant to do community organising, and then doing some agitating in college, but it took me a while to figure out how to use my specific skills (communicating, writing, systems-level thinking) in the type of work I actually wanted to do.

Hear more from Eve this summer
Want the opportunity to hear more from Eve Crevoshay and the Take This team? She’ll be leading the conversation at the upcoming Pocket Gamer Connects Seattle among hundreds of other incredible industry leaders. Make sure you secure your spot at our west coast conference today and save up to $275 with our Early Bird offer before prices rise.

IWD22: "No matter how empathetic someone may be... they will still never know how it feels to be any other person"