Is Web3 coming? Is it already here? What does crypto bring to the world of games? PocketGamer.biz sat down with the Storms CEO for his take on the future of games 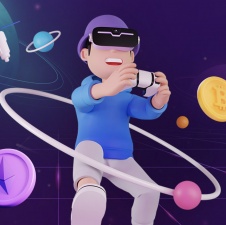 Over the last six months, more than $1 trillion US dollars worth of crypto has vanished.

With cryptocurrency being one of the key elements in the Web3 space, this phenomenon raises a question about what the future of Web3 looks like.

We sat down with Storms’ CEO David Yin to get his insights on what made Storms bullish that the future of Web3 gaming remains there despite the crypto market collapse.

PocketGamer.biz: Before we delve into Web3 gaming, let’s talk about the recent crypto market collapse. What actually caused it? How could a 'stablecoin' crash?

David Yin: It’s a combination of increasing inflation, geopolitical instability and rising interest rates – all of which led to a sell-off in both the crypto and equity markets.

This market collapse was further exacerbated by the downfall of the supposedly stablecoin TerraUSD, which was pegged to the USD with the help of its sister crypto token, LUNA.

So you can imagine. When LUNA suffered from extreme selling and lost 99.9 per cent of its value within two days, it naturally impacted TerraUSD and caused greater panic. All these phenomena further made the crypto market volatile.

Given the recent cryptocrash, do you think it’s wise for gaming companies to enter the Web3 space? Why?

The short answer is yes.

Here is why: Web3 promises immense opportunities to both gamers and gaming studios globally.

For gamers, Web3 provides them with the possibility to play and earn from the time and efforts that they have invested in a game. Instead of spending a lot of time grinding through the game and not earning an income, with Web3 games, gamers can experience the same amount of enjoyment whilst earning.

Nearly three-quarters of players surveyed by Fortnite last year were supportive of the idea of having a player-to-player item trading platform. In the Web 2.0 world, this idea is tricky to be implemented due to various reasons - including mitigating fraud and its economic impact on the gaming company that produced the assets.

However, in the Web3 world, the transparency and traceability that blockchain prevents fraud from happening. The in-game economy in Web3 is also fair to both parties – players can earn by trading their digital assets while gaming companies can continue to bring improvements to the game from the transaction fees collected whenever trading happens.

With Web3 offering benefits such as opening up new revenue sources, allowing for networking opportunities with like-minded communities, and giving players more ownerships, Web3 is too significant to be shadowed by the recent crypto market collapse.

What are the current challenges in the Web 3.0 gaming space?

There are three fundamental challenges that need to be addressed.

Firstly, the current Web3 games often require players to buy tokens or NFTs to play - which creates an entry barrier. Coupled with the recent crypto market collapse, there is a great fear among players to take part if they have to invest to play.

This leads us to the second challenge. As today’s tokens are often used as revenue sources solely, they have limited intrinsic value. This does not only make users more reluctant to take part if they are not ready to take the risk, but it also results in a heavy reliance on user growth for the system to work.

This reliance creates an inflationary environment – which, coupled with the market volatility, leads to a further drop in token value and higher player drop-off rates.

Current Web3 games often require players to buy tokens or NFTs to play [...] there is a great fear among players to take part if they have to invest to play

Last but not least, the rug pulls (i.e., a scam move by a Web3 project where the owners of the project run away after taking the funds that have been invested into them) that exist in the Web3 space do contribute to making players feel sceptical about the ‘play-to-earn’ concept, and the fact that today’s Web3 games tend to focus heavily on the ‘earn’ part often leads to the quality of its gameplay being compromised.

Let’s talk more about the scepticism over the use of cryptocurrency or NFT in games. Could you please share your thoughts on it?

Despite the challenges, I am bullish that Web3 remains the future of gaming.

As I mentioned, the current crop of ‘play-to-earn’ players is too fixated on the ‘earn’ element. As such, they move to whichever Web3 gaming token is on the rise and quickly abandon it once their earning ability has diminished.

I believe that the way forward is to lower the entry barriers for players to join the fun in the Web3 world. This could be done by allowing players to rent digital assets from other players, or enabling Web3 guilds where players can unite and share resources with others to achieve a common goal.

Besides lowering the entry barriers, gaming companies have to also give users more reasons to enter Web3.

One way to do so is by introducing more utility to the games’ NFTs or tokens – such as enabling players to defeat enemies twice as quickly, unlocking exclusive content (in real-life or virtually), or networking with like-minded players using them. That way, players can see that these NFTs or tokens are beyond investment instruments - as enhancing the gaming experience!

Indeed, attracting players is one, but ensuring that the system is sustainable is another. In addressing this, Web3 games need to have mechanisms that can prevent or counter an inflationary environment. This could take the form of having a hard cap on their token/NFT supply or a soft cap where token/NFT supply is released in batches in relation to the number of players in the ecosystem.

Lastly, what is it that the industry must know about Web3?

Web3 is here to stay, and every player in the industry has a role in shaping what the future of Web 3.0 gaming looks like.

This should be started by addressing people’s perception of the Web3 gaming space by bringing more high-quality games - that offer ‘play and earn’ capabilities and engaging gameplay - to the ecosystem.

Storms is currently developing its Web3-based gaming platform which is slated to be launched later this year, and I am hopeful that it will contribute to making Web3 an inclusive and fun place for gamers to connect.

Companies can find out more about Storms here.