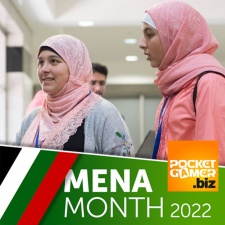 There’s great potential in the Middle East and North African games market right now. The pandemic-inspired growth in Western markets seems to be slowing; in contrast, the MENA market has become the fastest-growing scene in games.

This is the third part of our series talking with Arabic game makers. In this instalment, you’re invited to watch a video interview with the sisters behind Sakura Games.

There is a young demographic in Jordan. The median age is less than 24 years, compared to over 38 in the US, meaning that there’s a youthful population ready to embrace technology. Sham and Jana AlBdour embody that. You may recognise the sibling developers as the winners of 2021’s Rising Star award at the PocketGamer.biz Mobile Games Awards.

They are originally from Jordan but are currently spreading their wings, including Sham attending university in Turkey. They have become regular speakers at our events since PocketGamer.biz encountered them for the first time during the Big Indie Pitch activities in Jordan a few years ago, and they have great insight into the opportunities for young creators in the region.

Here’s the full video panel, with some excerpts below.

You can watch the full video interview above to see and hear about their experiences in their own words. And here are the key takeaways from the conversation….

On their experience as young game makers:

Sham: We were struggling in school, and we know how kids do, unfortunately, suffer from the systematic, modular, rigid curriculums. There’s no fun, no interactivity. So we started in 2017 with the idea of creating edutainment games.

We wanted to change the world via these educational games, and we made many prototypes and worked with a couple of companies. The impact we’ve seen always made us so happy to continue and do more and create more games.

When we started there was a lack of edutainment content. There was a lack of content in the Arabic language. The concept of 3D and interactivity in games, especially in the region, wasn’t that much. The fact that we started when we were still in school, and the fact that the studio was founded by two females in a male-dominated industry made Sakura special. We’re grateful to see that today, in 2022, there’s more awareness about the importance of games being an educational tool.

Jana: We found out that patience is really important, especially in our industry. Making games isn’t easy, and you have to have a lot of patience to get through the hard times. It’s a very risky industry. You don’t know for sure that this is going to be successful. You can work on a game for years, and then it could fail. You could have tonnes of bugs and have to spend weeks fixing them. It really requires a lot of patience. We have learned that through our journey here.

It’s OK not to understand things. It’s OK to feel like you’re not really getting this, and you don’t understand what this does, and this does, and it’s OK to just be following tutorials and writing code after someone. Because it’s not easy. You don’t get it overnight. It takes time and practice – tonnes of practice.

Sham: One other thing that we learned with time is that game “feel” is very important. For a long time, we were focusing on the technical part and just dedicating time to making it efficient and work well. But it took us time to learn that it needs to feel good, to make the player feel relevant and entertained while they’re playing the game.

Not only technical skills are required. You need to have soft skills. So in games, you need to focus on the game feel and the story as much as you focus on the mechanic and the 3D art. If you have good art and a poor mechanic, it won’t work. And if you have a good mechanic and good art and there’s no feeling – there’s no idea, there’s no story the game is telling – you might be lacking something that’s very important to the success of the game.

On games and education today:

Sham: There’s more interest from youth to start being game developers and to work in the games industry. We’ve seen, in the last two to three years, many people more interested in becoming part of the industry, learning more, and working in the field of games, which is really interesting to see people choosing to be creators and not only consumers. There’s more awareness about it being a job.

There’s more interest in working in games or technology, and maybe there are a few courses from universities in the field of game design and development. Which we hope for them to increase and to have full curriculums that teach these subjects. Because they’re as important as other technology fields.

Making games isn’t easy, and you have to have a lot of patience to get through the hard times

Jana: I think there’s more room for serious gaming now. After the pandemic, people have started understanding that games are not just a waste of time. They can be used to teach things and to improve skills, and even non-edutainment games have their own value in growing teamwork skills.

On the representation of the Middle East region in games:

Sham: It’s unfortunate that even when we, in the Middle East, create games, we usually create them in other languages or we make them in English. I’m very happy to hear titles in Arabic for games that are fun, from our culture. You can see that there are characters that you can belong to, or feel like, “OK, these people can represent me.” So it’s really interesting to see the change, and I feel proud that the industry in the MENA region is growing.

Localising games for MENA is not only about language. I would love to see more representation of characters, of environments. I wish we could see good representation of the region and the culture. I’m mad at Disney because they represented the Arab world in a bad way in Aladdin. There are many stereotypes that I wish were broken. I wish I could see characters that were like us.

In the MENA region, although we speak one language, we have many accents, and there are many differences. So to see more things that keep in mind how diverse the Middle East is: that’s going to be awesome. I wish when I’m playing a game that is targeting the MENA region or is targeting people who speak Arabic, it has the diversity we do in the region.

On the return to live events after the pandemic:

Sham: I was at Gaming Istanbul last week. It was great. I witnessed that the gaming scene in Turkey was amazing. It was amazing to see the excitement of people, and we were finally face to face. I missed seeing people, connecting with people, and attending sessions, and being around people in the real world. We want to talk about games face-to-face. So we’re looking forward to PGC [Pocket Gamer Connects] in Jordan. It really was a huge part of our career, of our story.

Jana: We’re looking forward to catching up with all the people that we met for the first time at PGC and haven’t talked to in years. That’s exciting.

You can watch the whole conversation above or on YouTube, including Sakura Games’ thoughts on global trends, education and advice for Western companies approaching the MENA market. If you’ve enjoyed this, you can watch a video from Pocket Gamer Connects Digital #4 with Sham and Jana AlBdour talking about games in education here. Remember to bookmark our Marvellous MENA Month content, and register for our events in Amman (12-13 November) and Riyadh (30 November-1 December) to discover more about this fast-growing games market.