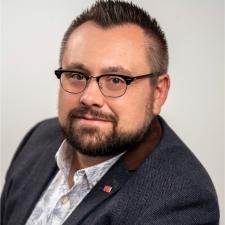 People worldwide are growing more concerned about social issues such as LGBTQ+ rights. It isn’t enough anymore to simple acknowledge the existence of the queer community, or even to feature characters from it. It’s more important than ever to feature LGBTQ+ characters in a respectful and authentic fashion, especially as the community faces renewed prejudice worldwide despite pushes for greater inclusivity. By doing so, creators can better represent the community.

We spoke to Gayming Magazine founder Robin Gray about his work, the upcoming Gayming Awards in New York, and why he is pushing for more representation both in games and within the gaming industry, as well as how he’s helping to hold game makers accountable to the community.

PocketGamer.biz: First of all, can you please introduce yourself and tell us a little bit about Gayming Magazine and the Gayming Awards?

My name is Robin. I'm the founder of Gayming Magazine, the world's only LGBTQ video game magazine. Gayming was founded in June of 2019. Fast forward to now and we’ve reached over a million and a half people a month. We have two years of our Gayming Awards under our belt, and we're going into our third year.

The Gayming Awards launched in 2021, during the pandemic, and that was a fully virtual affair. That was watched by over 120,000 people on Twitch, then in year two we had 320,000 people watching live on Twitch and 400 people in a room in a theatre in London. And then this coming year, 2023. We're leaping over the pond to Broadway in New York City, which I'm very excited about. We're targeting over half a million people watching with our broadcast partners Twitch and IGN.

Some video game awards have started to have this kind of special “doing good” category. That's great, but trying to capture the contribution of not only the LGBTQ community but other groups of underrepresented workers and their contribution in one award for one game in one award show just seemed really tokenistic in a way, and very oversimplified. So the opportunity that was presented to us was, why don't we have a fully fledged, queer video game award show, where we can dig into some of these more nuanced categories, and celebrate these different facets of contributions to the global gaming industry.

With that in mind, and what you've managed to achieve so far, what role do you see Gayming Magazine and the Gayming Awards occupying within the game space?

It's a celebratory role. We exist mainly to kind of uplift and be positive, and celebrate the wider contribution of LGBTQ people both in the industry, but also in games. More recently, with gaming, we have kind of broken out of our core programming a little bit, and got further into the wider geek culture with comics and anime, tabletop gaming, movies, entertainment, that sort of thing, anything with a particular kind of queer geek angle.

That being said, we don't shy away from holding a mirror to an industry that needs it, and we are unfortunately holding it up quite regularly at the moment. We've seen success in doing that. We have been part of Rockstar’s decision to take out some of the transphobic elements of their redo of Grand Theft Auto V, for example.

We adopt a really interesting position, where we are a games magazine, we do reviews, features, interviews, etc. But we don't necessarily feel like we're in competition with many people, because what we do is we look at stuff through a queer lens, whether it's celebratory or whether it's holding a mirror up to the industry and saying, “Hey, this isn't great” we're able to kind of carve out that niche for us.

We're also the only LGBTQ outlet that actually streams on Twitch regularly as well. So we have our weekly streams on Twitch and our podcast, which is on a break at the moment, that are sort of fortnightly. So we have managed to carve ourselves a little space out there as well, which is great, and I think it just adds to the flavour of what gaming can provide to the world.

Can you just explain why representation is so important?

It's important to see yourself. People get inspired, and get their feelings validated in a way, by seeing themselves. There was a time not too long ago in the video game space where all we had to cling to was subtly queercoded (hinting at a character’s queerness through subtext without confirming it) characters that were written straight or definitely straight, but because they dressed a certain way, or because they acted a certain way, we clung onto them for dear life because that was the only hint we got of any kind of queerness in video games. And now you can't go too far without tripping over a gay character in a video game, which is great.

We're seeing that representation drive happening now across Hollywood, across the TV industry. Traditionally, the video game industry is usually two or three years behind the rest of the entertainment industry. We're now starting to see that happen in the video game world - positively representing characters that are good, authentic, LGBT. It's inspiring, and it helps.

It helps younger people particularly, but even people at my age understand themselves more, because because they are seeing themselves, they are normalising themselves, and they're not going to feel as alien as they might have done. So representation is always important, you can't be something if you don't see it.
We're now in a phase where we need to be starting to dig deeper into representation. Up until recently, LGBTQ representation has been the Will and Grace kind. It's usually gay men, and it's either gay men who pass for straight, or gay men who are completely flamboyant. That was the staple of ‘here's how to do a queer character’. Creators would probably dip their toe into the the lesbian world as well, because we all know that for cis (those who’s gender identity aligns with their assigned gender at birth) straight men, the lesbians are easier to appreciate on screen than gay men.

I think one of the best examples of a game recently that created a really authentic character was Tell Me Why. A brilliant game which made history because you have to play as a trans character (Tyler Roman). But instead of wrapping the character in bubble wrap, and really panicking about how you're handling them, the character at times is a bit of an ass. He's a bit of a brat. And so you actually can relate to him more because he really has edges. But I think sometimes companies are just scared to ride those edges because they don't want to run the risk of getting it wrong.

Fantastic, and he won your best LGBTQ character Award?

He did indeed, in year one. I believe the game itself won a couple of bits in year one as well, including one of the authentic representation awards. It's a great example and it was actually something we were very fortunate to work on with Xbox. When the initial announcement of it took place in one of Xbox’s YouTube videos, and when they announced there was a trans character in this game. There was a collective intake of queer breath, and so they actually reached out to us to help shepherd this game, to reassure the audience that they were doing it right, because they consulted with trans employees. August Aiden Black, the voice actor, is trans himself, and he was able to add input to it as well. So there's a lot of examples of how to do this sort of thing right.

That's where authenticity kicks in, and authentic representation can only be written by people that have actually been there, done that, and got various T-shirts. A good example of it is in Borderlands, where a character just mentions his boyfriend in passing. The character’s not effeminate. The mission isn't about being gay, he's just sending you out into the wasteland to go and kill some animals. But he just talks about his partner in a male sense, and just moves on, and in the same way that if you ever encountered a heterosexual couple in the game, you just brush past it. That's just what it is. And I think that is a perfect example of authentic representation, because that really is contrary to a lot of people's opinions. We're not actually after any kind of special treatment, we just want to exist.

The difference between representation and authentic representation, is that the authenticity comes from grounding them in reality, and that in itself will help representation of the queer community, and in the real world, because that normalises it and it gets it over this hump of “Oh, that's a bit weird. They're obviously LGBTQ.” Whereas now it's just “oh, she's got a girlfriend. That’s great”.

Do you feel that the queer community is being commodified to an extent?

I think it comes back to the overall mission of the company. If they've written a really good game, and part of the journey is that they've decided or discovered, however it shakes out, that that character best fits being a lesbian or non-binary, then that's coming from a much deeper place of meaning. I can't say no, but I'm not saying a solid yes to being commodified - because I think the community has to be commodified in a way. We're kind of wanting to be pushed, to get representation out there,therefore we have to put our heads above the parapet - we have to be held up and celebrated - but only in the same way that a game can have strong female characters. By doing a game that centres them by default, you're commodifying them, but it's the meaning behind it that I think is the most important.

The Gayming Awards 2023 to be held on Broadway