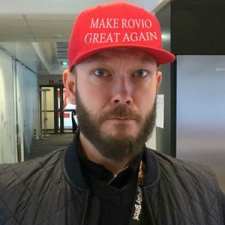 Like the prodigal son, Rovio's one-time head of marketing Ville Heijarihas returned to the nest.

Heijari left the Angry Birds developer in 2012, working for mobile video network Vungle and Finnish indie Two Men and a Dog in the meantime.

But his twitter now shows a clearly delighted (!) Heijari, with the description "Back at the Bird Factory @Rovio #makeroviogreatagain"

Rovio has been working hard over the past year to rebuild its games team, adding industry veterans such as Wilhelm Taht as Head of Games, Eric Seufert as Head of UA, and F2P consultant Mark Sorrell to its team.

And they will all be busy.

As well as the release of The Angry Birds Movie in May, and the imminent release of Angry Birds Action!, it also has two midcore games - Battle Bay and Deminions Unleashed in soft launch.