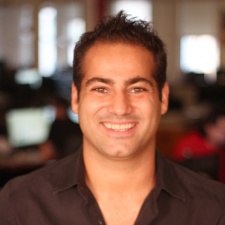 Sherman will remain on the board of directors but is stepping back from his operating role. He had been president of the publisher since January 2011, following a seven-year stint at EA.

El Agili has been with Tilting Point since August 2015 when he joined as COO. Before joining, he spent 12 years working at Gameloft in a variety of roles.

"It's an extraordinary opportunity to succeed Dan, who has been crucial in establishing Tilting Point's strong position in the mobile publishing world. The investments we've made in our team and toolset have set the stage for the incredible growth we are experiencing," said El Agili.

"In my new role, I will continue building the highest quality services with the best technology so our partners can scale their apps profitably, always keeping Tilting Point one step ahead in this fast-evolving industry."

Tilting Point also announced that its Q4 revenues had quadrupled year-on-year but didn't reveal exact figures. This is thanks in part to partnerships with developers such as Nukebox Studios and Disruptor Beam in 2017.