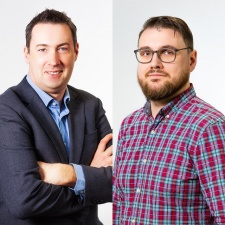 The move comes as co-founder and previous CEO Paul Farley (pictured, left) moves to head up live operations platform ChilliConnect, which was created by the team at Tag and spun out as a separate company in 2017.

The transition will take place in April, though Farley will still remain involved with Tag as chairman.

Farley now aims to take expand ChilliConnect’s operations with the goal of “democratising live ops and connected gaming” through a single SDK/dashboard for developers and publishers.

“Growing Tag from three people to become the awesome and respected development studio it is today has been an equally challenging and rewarding experience,” said Farley.

“With a wealth of talent and experience at Tag, I’m in an enviable position of being able to pass the day to day management of the studio to Marc and a very capable team around him.

“My focus now moves to a very exciting opportunity with ChilliConnect as we aim to become the leading platform for live ops and connected gameplay.”

Williamson has been at Tag Games since 2010 where he has held positions of head of production, studio manager and most recently development director.

“I’m proud and privileged to be taking the helm at Tag Games”, said Williamson.

“Whilst it is business as usual, I will be looking to further strengthen the team and develop our culture of innovation and excellence.

“The development teams at Tag are incredibly talented and I’m looking forward to helping provide them with many new opportunities to showcase their skills whilst growing the business during this new phase.”