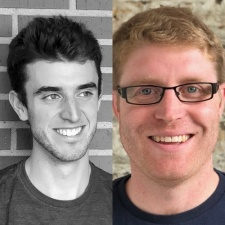 London-based mobile games developer Hutch has bolstered its ranks with the additions of a senior designer and client engineer.

Former Marmalade designer Mark Bridle (Pictured left) has joined the racing game-centric studio as a senior designer and has racked up some experience mileage at Jagex, working on RuneScape Legends and Transformers Universe.

He’ll be working on an as-of-yet unannounced racing title for 2019.

Pane last served as lead programmer on ALPixel’s A Place for the Unwilling, an indie narrative adventure game for PC and consoles.

Pane will be put to task on Hutch’s racing game Top Drives. The car-focused CCG title racked up three million downloads two months from launch last year after hitting one million in its first week.

It also managed to top the racing charts in 93 countries and card game charts in 121 countries.