“Bryce, Alison and Camilla have the ambition, shared mission and energy we need as we continue to build Atomico” 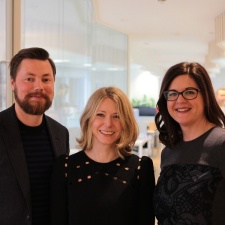 Chief of staff Alison Smith, head of communications Bryce Keane and head of investor relations Camilla Richards have been named as Atomico’s newest partners in a blog post released this week.

“Bryce, Alison and Camilla have the ambition, shared mission and energy we need as we continue to build Atomico,” said Atomico CEO and founding partner Niklas Zennström.

“I’m proud to have them as Partners at Atomico and excited to see what they will achieve in the years ahead in their new roles.”

Atomico has also made a number of internal promotions among its investment team. Senior associate Stephen Thorne has been bumped up to principal, while associates Hillary Ball, Will Dufton and Adam Lasri have taken up new senior associate roles.

Atomico’s Alexis Bonte spoke at this year’s Pocket Gamer Connects London - prior to his appearance, he gave us insight on the modern games industry from the VC firm’s perspective.

At the time, Bonte explained: "With all the wealth of information out there nowadays, there is no excuse to be unprepared and doing an average pitch. Competition is fierce and only the absolute best get funded by experienced investors."