LoveFrom launches later this year with Apple as first client 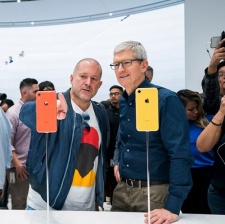 LoveForm will launch later this year with Apple confirmed as the firm’s first client. However, Ive will continue to work closely with tech giant on a number of unspecified projects.

Ive has overseen design and hardware since 2012, taking a major role in creating the iMac, iPod and iPhone. More recently, he helped complete Apple’s new headquarters in Apple Park, California. He initially joined the company in September 1992.

His successor has not been named with the position looking to be split as design team leaders Evan Hankey confirmed as VP of industrial design while Alan Dye has taken up the VP of human interface design role.

“After nearly 30 years and countless projects, I am most proud of the lasting work we have done to create a design team, process and culture at Apple that is without peer,” said Ive.

“I have the utmost confidence in my designer colleagues at Apple, who remain my closest friends, and I look forward to working with them for many years to come.”

Apple CEO Tim Sweeny added: “Jony is a singular figure in the design world and his role in Apple’s revival cannot be overstated, from 1998’s groundbreaking iMac to the iPhone and the unprecedented ambition of Apple Park, where recently he has been putting so much of his energy and care.”

Ivy’s decision to exit the tech firm comes at a time where Apple has seen a lot of change in management, while numbers have been down over the past year. The company’s revenue fell five per cent year-on-year to $58 billion in Q2 2019 as the company's services business failed to make up for the declines in hardware sales.