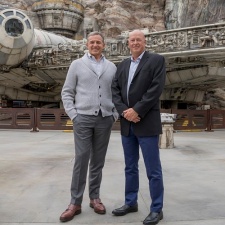 Chapek has been with the company since 1993 and most recently has been acting as the chairman of Disney parks, experiences and products. Before joining Disney, Chapek worked in brand management at H.J. Heinz Company and in advertising at J. Walter Thompson.

Iger will see out the remainder of his contract (due to end of December 31st, 2021) in the role of executive chairman, with Chapek reporting to both him and the board of directors.

"I am incredibly honoured and humbled to assume the role of CEO of what I truly believe is the greatest company in the world, and to lead our exceptionally talented and dedicated cast members and employees," said Chapek.

"Bob Iger has built Disney into the most admired and successful media and entertainment company, and I have been lucky to enjoy a front-row seat as a member of his leadership team. I share his commitment to creative excellence, technological innovation and international expansion, and I will continue to embrace these same strategic pillars going forward.

"Everything we have achieved thus far serves as a solid foundation for further creative storytelling, bold innovation and thoughtful risk-taking."

This time last year, Iger stated that licensing is the best model for Disney in games so it will be interesting to see whether Chapek's philosophy is similar.

Following this, Disney offloaded its mobile development studio FoxNext Games to Scopely for an undisclosed figure. Fogbank Entertainment, a FoxNext-owned studio, was reportedly closed down following the acquisition.