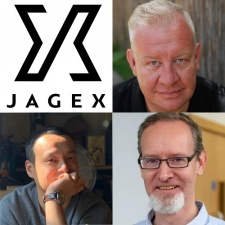 RuneScape developer Jagex has brought on a number of new hires who possess experience from Ubisoft, Smilegate, Electronic Arts and more.

First up we have former DAQA founder and VMC director of business development Ben Wibberley, who has joined as the vice president of game operations at the UK studio. With 25 years of experience in the industry, Wibberley will be focused on providing QA to all Jagex games, the maturation and growth of Jagex’s localisation efforts, as well as oversight of its outsourcing efforts.

Chris Stamp has been appointed lead producer on an unannounced project, bringing 18 years of experience from Ubisoft, Earthbound Games and Reagent Games.

Finally, Jay "Jaeyoung" Cho will join Jagex as a lead producer on Old School RuneScape. Cho previously held a producer role at Eyasoft before going on to become the director of business development and corporate strategy at Smilegate. Most recently, he was the head of mobile development at EA in South Korea.

“As we celebrate 20-years of the RuneScape franchise, we continue to evolve RuneScape and Old School RuneScape for our amazing community across PC and new platforms – with both games now available on mobile and Steam," said Jagex CEO Phil Mansell.

"When you factor in publishing our first third-party game Space Punks, developed by Flying Wild Hog and released under our the Jagex Partners banner, it’s clear that we’ll continue to build our teams and expand the reach and appeal of our games to old and new audiences alike."

Jagex senior vice president of development Nick Beliaeff added: “We’re extremely happy to be in a position where we can bring so many new and talented people into Jagex, especially in such challenging times.

"Hiring the very best and adding to the depth of experience we already have remains pivotal to our ongoing success, and to maintaining both the RuneScape franchise and other projects in development."

These appointments follow on from Jagex's hires in June, where it brought on workers from PlayStation, Bethesda and Insomniac Games.