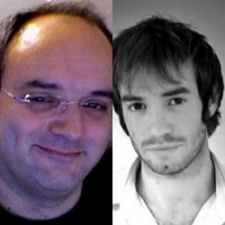 The relationship between major publishers and indie developers offers a splendid balance to the creative field of gaming that can spoil you at the best of times.

For every major publisher such as Tencent that is bringing battle royale fun to the masses there is a Jason Roberts masterminding something fresh and innovative like recent indie favourite Gorogoa.

One of the newest frontiers of gaming for developers of all sizes to test their creative juices is that of chat apps. The appeal is instantly noticeable to all developers, as a premade audience of hundreds of millions to billions of active users lay in wait.

Games have already been integrated into the chat app experience in countries like China and South Korea via apps like WeChat, Line and KakaoTalk. More recently, Tencent launched a WeChat mirror app called Weixin that offers mini-games that can be played instantly without the need for a download.

In the West, Facebook has also been busy improving its Instant Games platform, which works much like Weixin and has been in development for the last couple of years.

The doors finally opened to all developers in March, although until then the notion of playing games within a chat app (and also the News Feed in Facebook’s case) has seemingly flown under the radar. There’s also Apple’s iMessage, which now has its own app store that plays home to a number of titles from recognised names.

Despite the big developers and publishers taking the limelight right now, there appears to be an exciting opportunity for indies, particularly with a focus on focused gameplay mechanics.

According to Perchang co-founder Ben Murch, given the spirit of indie development is a willingness to experiment with exciting new ideas, we can expect to see small developers take advantage of these new chat app gaming experiences.

Indie devs usually sit at the forefront of these new places, trying to make our mark before the big companies realise the potential.

“Indie devs usually sit at the forefront of these new places, trying to make our mark before the big companies realise the potential and ruin it for everyone,” explains Murch.

“Chat app platforms are the newest of these and yet to be spoiled.”

Alongside an indie spirit of innovation there are also more practical advantages for developers as they can engage with huge, prebuilt audiences, Strange Flavour CEO Aaron Fothergill tells PocketGamer.Biz.

“In general though, there’s absolutely nothing wrong with the basic concept of games being available within messaging apps,” he says.

“It’s another way to get games to players and, theoretically, can be one that’s helped by the fact that you’re already in a multiplayer environment.”

However, while chat app platforms can bring a game to a new audience, indie developers need to be mindful if the platform is the best place for their game, as some genres will suit the medium more than others.

“The question is simply: does my game work best within this specific messaging app or would it be better as a standalone app and advertise to users of the social app?” says Fothergill.

“If you’re within a messaging app, your players aren’t 100 per cent focused on your game. They’re there to chat, so your game is likely to work better if it’s more casual.”

Seemingly the biggest obstacle to maintaining a healthy ecosystem of indie developers on Facebook’s Instant Games platform is a reliable monetisation model to make it truly worthwhile.

Currently, the only monetisation method is through advertising, with in-app purchases still being experimented with in closed testing.

“I'd be really interested to see how Indie companies would monetise their titles,” says Murch.

“Directly asking players for cash on that platform seems unlikely to work. Revenue would have to come from somewhere else.”

Fothergill adds: “Your game is there to get more users to the messaging app and, hopefully, that’ll help you get more players in return.”

“Problem is, they’ll be players within the messaging app. Is there a way to get them playing a better monetising version of your game?”

Your game is there to get more users to the messaging app and, hopefully, that’ll help you get more players in return.

“There’s the classic Facebook lock-in problem, The more users/followers you have on Facebook, the more you have to pay them in advertising to be able to actually post anything to them.”

“So to get your game popular do you end up spending exponentially more to get players who you can’t then get a post to without breaking the bank?”

There may certainly be risks involved and questions to answer regarding how effective chat app platforms can be for indie developers. But that does not necessarily mean we’ll face a wait in seeing various developers take to the platform, as taking risks is inherently ‘indie’.

“At the moment it seems, from other indie dev friends of mine, that the Facebook Instant Games platform is pretty simple to get into at the moment, but limited in terms of monetisation,” said Fothergill.

“So it’s possibly one of those get in early and hope the early birds get the numbers when it does actually monetise things.”

Murch added: “We're agile enough to respond quickly and see what happens and that risk taker might be at the forefront of the next big boom.”