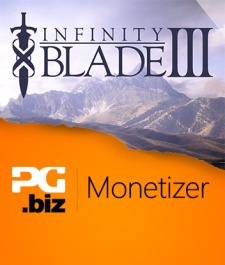 Following on from my speech at the Develop in Brighton 2013 conference, we're now running a weekly column called Monetizer.

You can see previous columns here, and we're posting screens showing the different techniques we come across on our Tumblr page.

You can also read my handy explanation of what it's all about and how we calculate the numbers here.

Typically the majority of games we cover in Monetizer are pure free-to-play games i.e. they are free to download. That isn't the case with Infinity Blade, which costs $6.99.

However, because it uses a standard resource system based on in-app purchases, with some adjustments we can still use the same tools to analyse the game.

When it comes to our Success ranking, Infinity Blade's pricing - combined with its high profile nature - means it's risen up the top grossing charts much faster than any free-to-play game would.

After all, we can consider a paid game to be a free-to-play game with an immediate average revenue per player - in this case $6.99 (its cost).

Both are much higher than the 0.01 we take as a benchmark for commercial success for a F2P game.

Of course, over time, we expect Infinity Blade III will drift down the top grossing charts as the majority of its players won't buy any IAPs so these initial numbers describe its peak.

In contrast, we typically assume that F2P games will take anything up to two months to hit their peak Success ranking

When it comes to how Infinity Blade III's economy works, it's a sophisticated beast.

First up, there are two hard currencies: gold, which is used to buy items such as swords, armour, shields, rings, gems etc; and chips, which are used to level up - or master - these items.

Despite your large sword, you need a key to access this chest

All these are single use consumables that require payment in chips.

Calculating the Currency Discount ratio, gold has a ratio 2.4 (relatively high), while chips have a ratio of 1.4 (average).

Combined with the minimum gold IAP being $0.99 compared to $4.99 for chips, we can see that chips are the game's key currency. This is underlined as you earn gold for each battle won, while chip rewards are limited to completing achievements.

When it comes to our main Monetizer ranking, the big issue with Infinity Blade III is to consider is how we deal with the game's $6.99 price, and the two hard currencies.

If we ignore the $6.99 price and consider the minimum IAP to be the chip minimum of $4.99, we get a figure of 100, which is our benchmark above which we consider a game highly monetized.

My gut feeling is a somewhat fudged ranking of 100 to 160 is probably the best place to put Infinity Blade III, which would make it a highly monetized game.

It's not an ideal calculation, certainly, but if nothing else, the game throws up some interesting future considerations for our process, both in terms of dealing with paid games that contain IAPs, and perhaps more importantly, multiple hard currencies; something we're beginning to see a lot more of.